It was a small but select band of five who met at High Row above Matterdale on a cool, and at times damp, July morning. Layers (including overtrousers!) were put on, and in a break with tradition the lichen folk and bryophyte folk set off along the track together. Within half a mile, layers were being shed. But in a further break with tradition it was more than a mile before the pleas to “just have a look at this boulder” were agreed to by the trip leader.

But what a boulder it was: a big lump of Borrowdale volcanics perched by the side of the path. It had the “usual” Parmelia saxatilis and P. omphalodes, Rhizocarpon geographicum, Ophioparma ventosa and so forth. But we found Cetraria muricata (and the more common C. aculeata); a small greeny lobe of Tuckermanopsis chlorophylla amongst grey Platismatia glauca; abundant Ochrolechia tartarea; the black squiggles of Lithographa tesserata; brown squamules of Schaereria cinerorufa. In total, we identified over 35 species. We thought an expert might have got 50.

Eventually, we prised ourselves away and headed along to Wolf Crags. If you’ve never been, it’s a cracking north-facing corrie at the end of the Helvellyn range, with views over the moorland to the A66, Blencathra and Scotland. There’s crags, with trees and other vegetation: some of it quite rich and out of reach of the grazers. There’s a lovely moraine dating from the last glaciation: the Loch Lomond Stadial (or Younger Dryas if you prefer to think of it that way).

We wandered across the corrie floor, examined gravels and boulders, and after lunch, headed up to explore the crags. We were hoping for a bit of more basic rock, though didn’t find any. There were lush ledges of Wood Rush, Golden Rod and Foxgloves;  a good selection of acid rock lichens including Protopannaria pezizoides. A rowan overhanging a cliff had an unexpected colony of Dimerella lutea, and as we moved along the cliff face the ground became more tricky and time-consuming.

Our aim was to refind the previously recorded Peltigera britannica, and Solorina saccata. We had grid references, and made it to one of the Peltigera sites at the base of a mossy cliff. Usually, it would be damper there, but it was July, and we had to wet the lichen to turn it green. Close examination showed the differences from P. leucophlebia, the other Peltigera that contains green algae: more concave cephalodia; much less obvious veins underneath; few and sparse rhizines. But we didn’t find the second Peltigera britannica site as we ascended a gully. Or perhaps I should say we did find the grid reference, but didn’t find the lichen. It didn’t really seem like the right habitat. And nor did we find the Solorina: this prefers more basic rocks and we didn’t find anything that looked suitable. Ho hum, we’ll have to come back another time…

… the journey back from the top of the crags was straightforward, though we did find a lovely example of Lichenomphalia umbellifera to detain us. The Lichenomphalias are basidiomycetes (rather than ascomycetes like most lichens) and have what appears to be a mushroom (maybe it is a “mushroom”!) rising from the thallus below. A rather other worldly thing to record as the last species of the day! 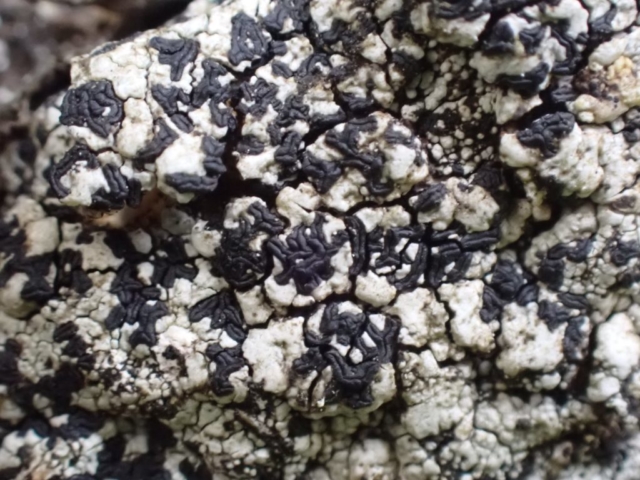 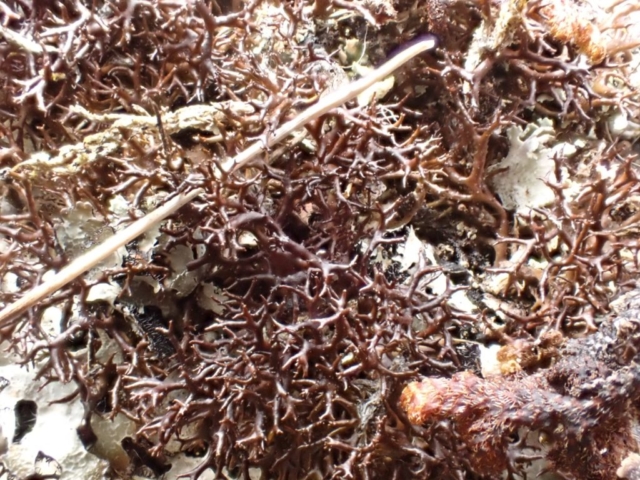 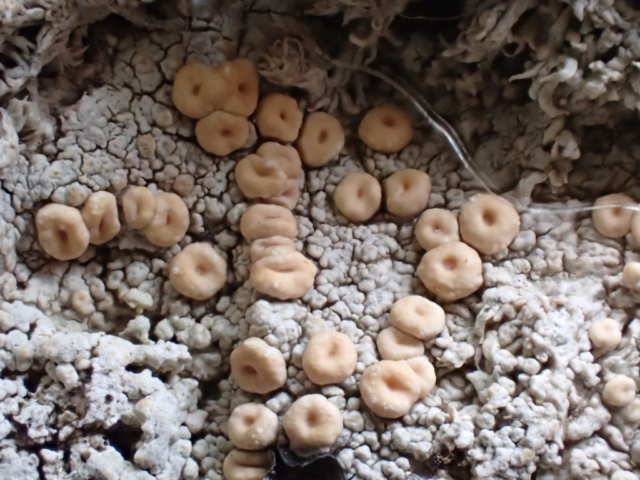 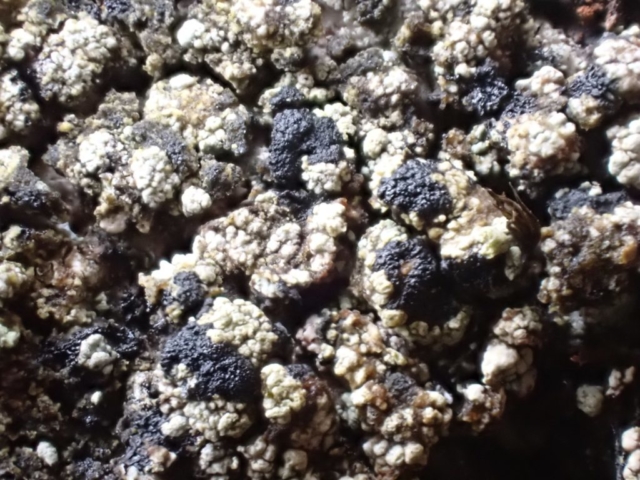 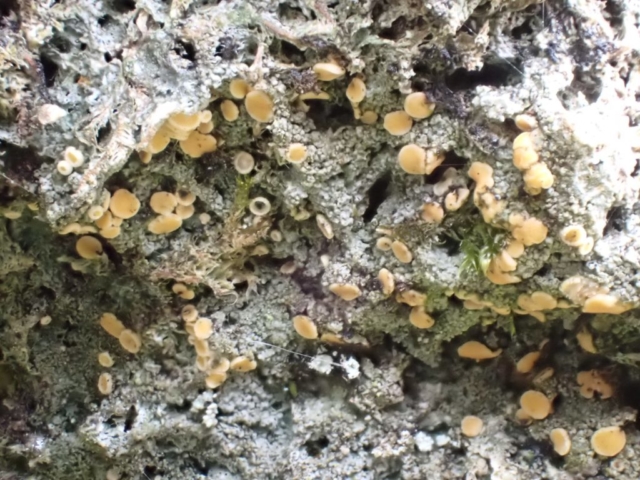 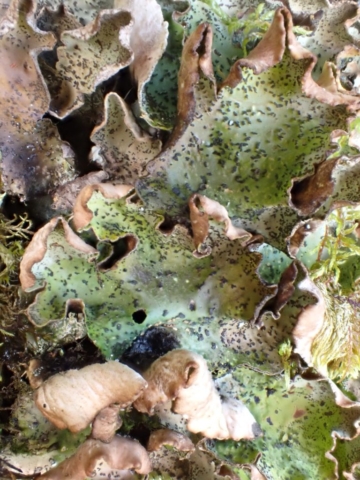 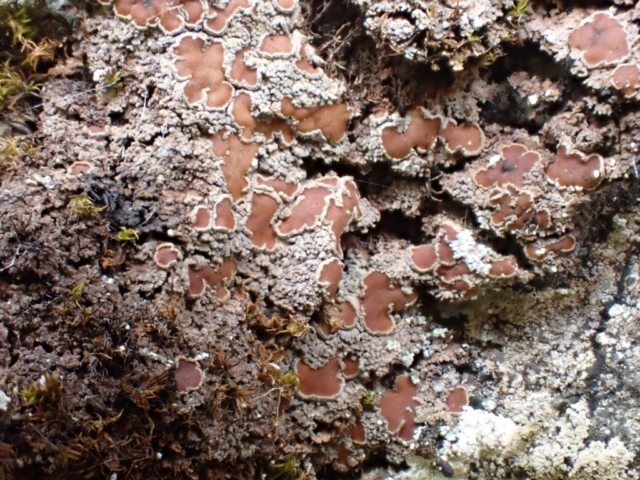 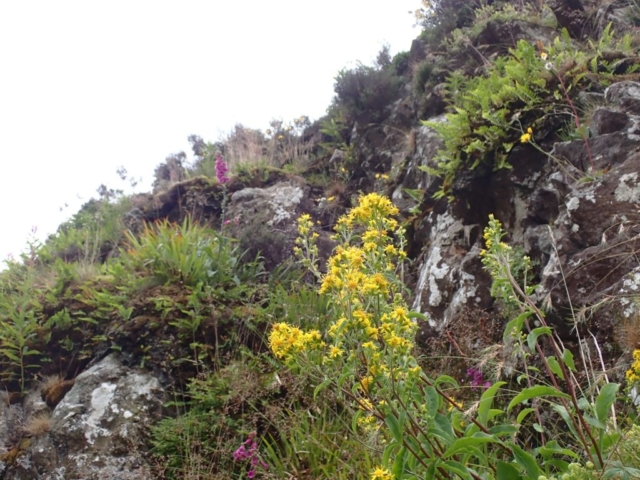 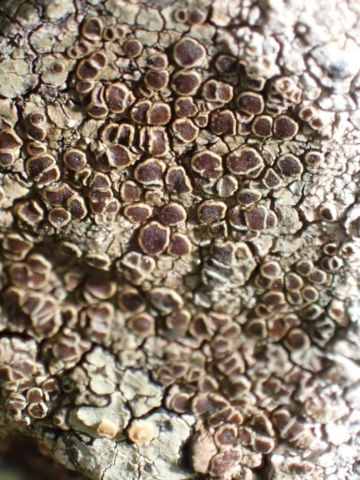 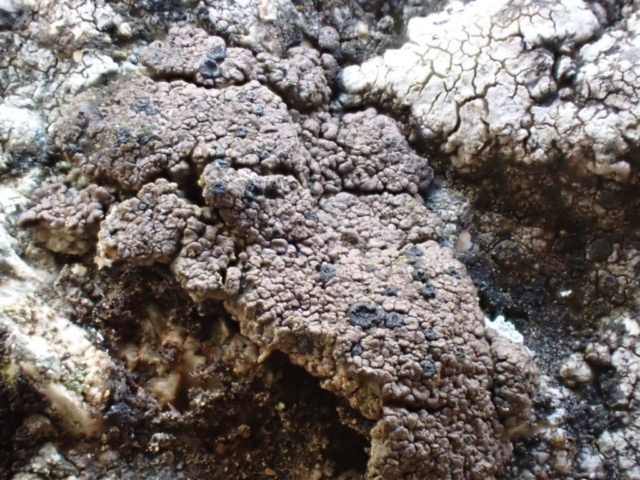 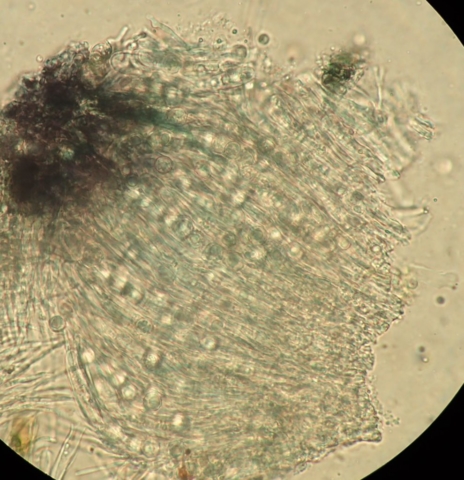 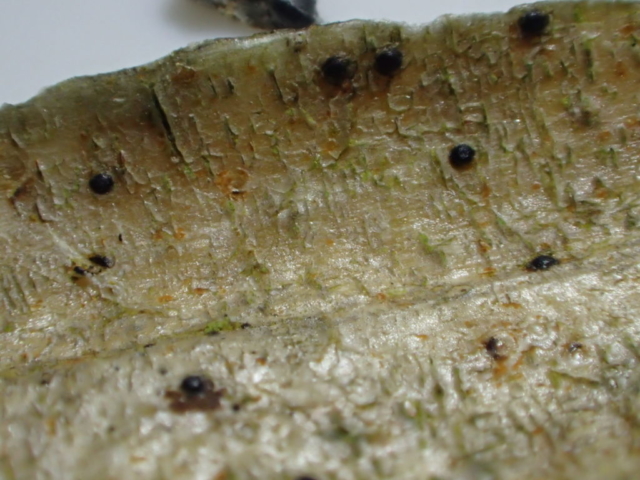 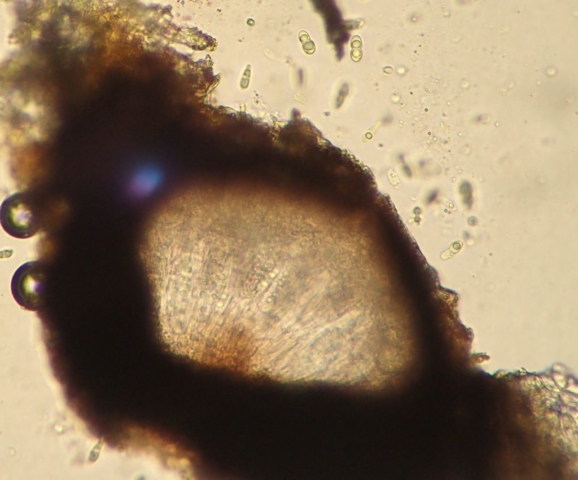