The morning mists melted away as a select foursome met by the Fell End Clouds quarry. Previous visits by lichen recorders had concentrated on the area nearest the road, so we decided to aim high; to head for the old metal mines and eastward squares with few or no records.

Of course, things didn’t quite work as planned: limestone boulders immediately grabbed our attention. Caloplaca flavescens, Squamarina cartilaginea, Acarospora cervina, Placynthium nigrum and Dermatocarpon miniatum were expected but no less lovely for that. The lack of corticolous species in the previous lists suggested the sycamore standing above the pavement had not been previously investigated so that detained us for a while. Beneath it, Acrocordia conoidea glowed pink on the shady rock, and Bilimbia sabuletorum was there on the adjacent mosses.

A short distance uphill and we found ourselves by Harry Hope’s Land; enclosed fields with an old barn/house. The Helga Frankland guide suggested Harry lived here up to 1820, but the barn seemed to be dated 1832. We couldn’t resist a look at the pollard ash, and found sheets of Pertusaria albescens and some P. pertusa. Back on the limestone, we edged around the enclosure and made it up onto pavements where heavy pebbles and green-coloured splashes indicated mineralization and mining waste. A party of skylarks headed north,  four grey wagtails headed south. There was a record of Solorina saccata here, though we couldn’t find it: but there was plenty of Peltigera leucophlebia about.

We headed east: Chris found some squamulose species on a low cliff including Romjularia lurida adjacent to Acaraspora cervina. Finally, we reached the unrecorded square and set to busily. There were lovely fossils, Peltigeras and common limestone species including the inset jewels of Protoblastenia incrustans. Chris and Caz picked up Farnoldia jaurana: it handily lived up to its name of “the cover slip breaker”. Eagle-eyed Caz found an Agonimia, now confirmed as A. globulifera. The only previous Cumbria record for this is far away at Askam-in-Furness!  A short distance on and we were onto siliceous rocks, with Parmelias saxatilis and omphalodes; Pertusaria pseudocorallina; Cladonia portentosa and C. uncialis biuncialis among the bryophyte and sphagnum mounds.

Further on still we found a swallow hole/ limestone outcrop bearing signs of caver activity. Among the rocks we found Peltigera rufescens and Solorina saccata on the north facing slope. Opegrapha dolomitica was revealed in a little gully. The swallow hole area demanded more time, but the afternoon was slipping away. We headed back towards the road via another sycamore amidst bigger mining trenches, dating presumably from the Napoleonic Wars: Phaeophyscia orbicularis and Normandina pulchella were perhaps the highlights.

It was time to go, but on the way back down we found consolation Felwort (autumn gentian) and Carline thistle. It’s predictable, and we say it every time, but it felt as though we had merely scratched the surface of Fell End Clouds: another visit would be well worthwhile. 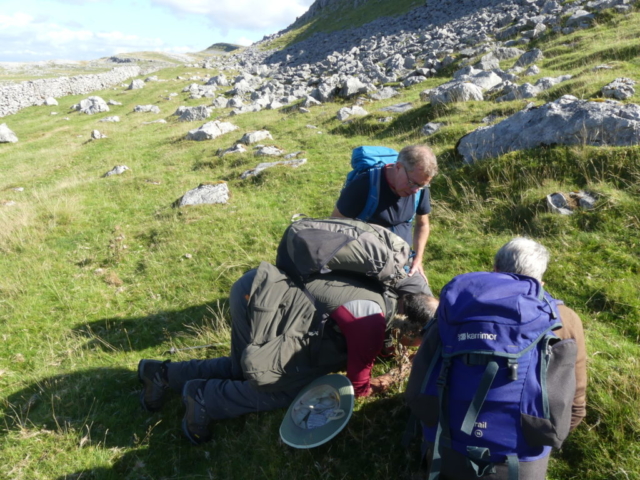 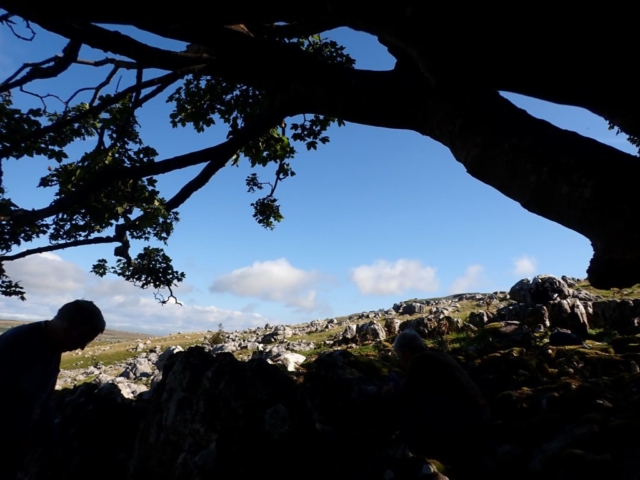 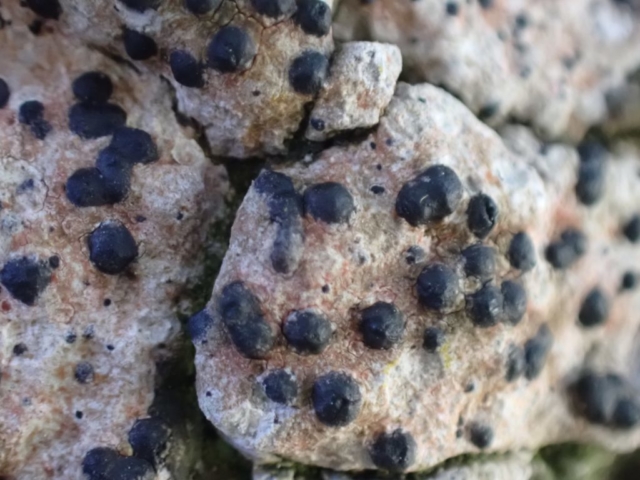 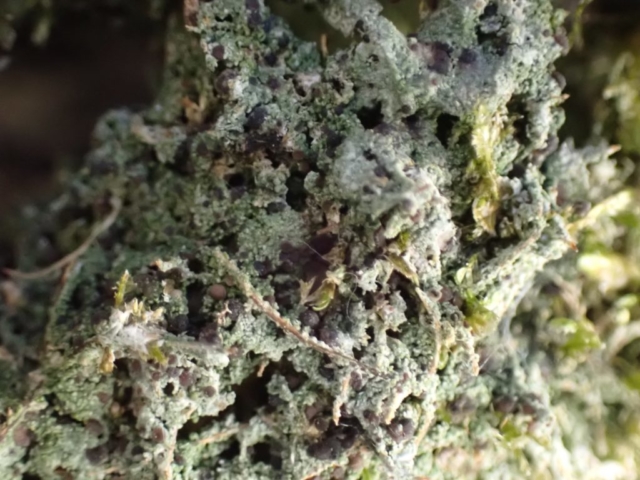 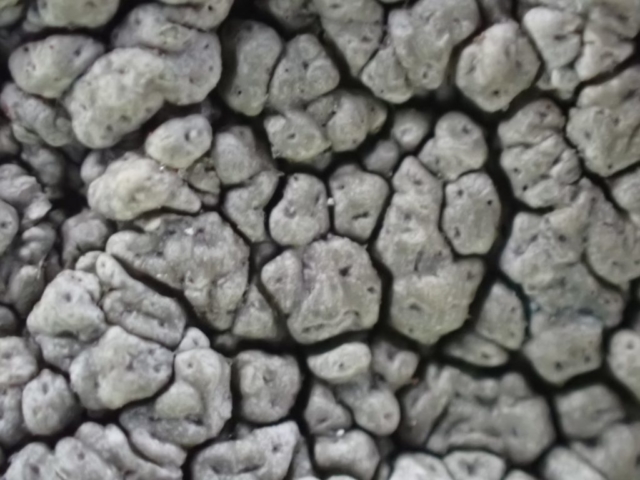 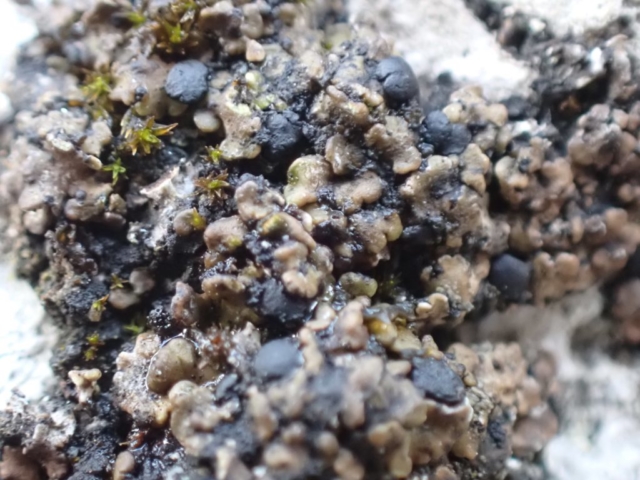 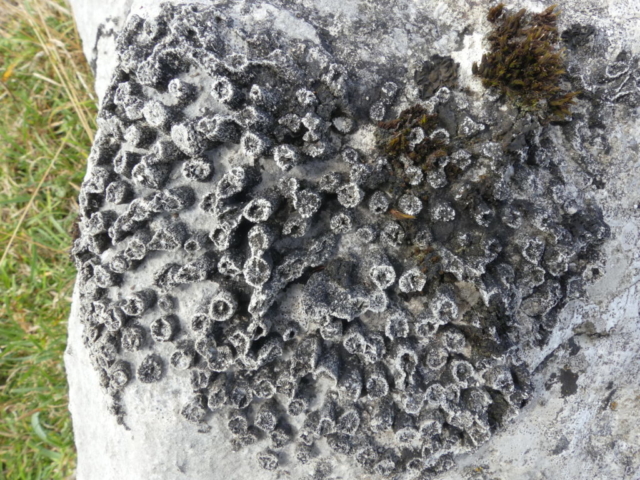 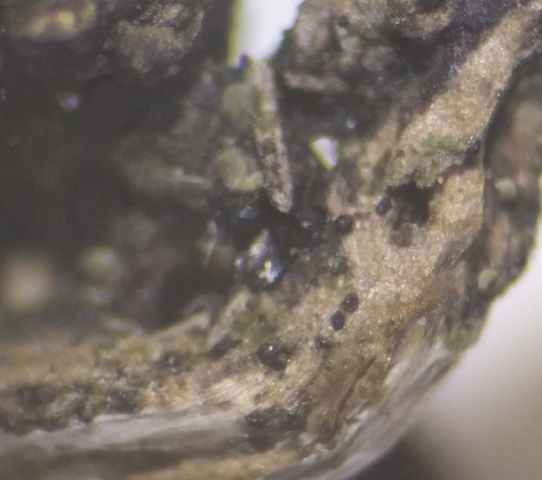 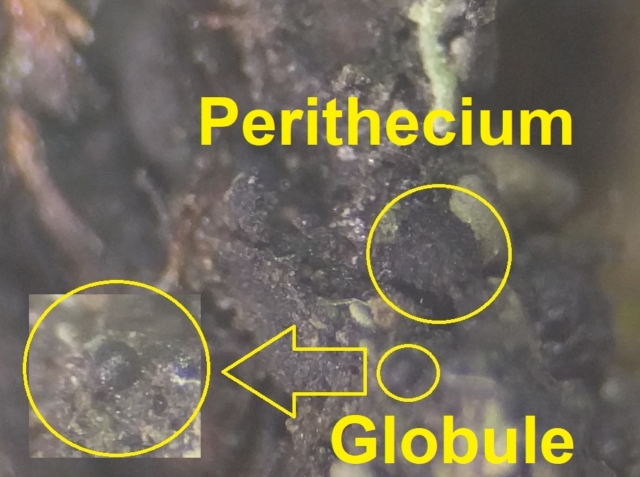 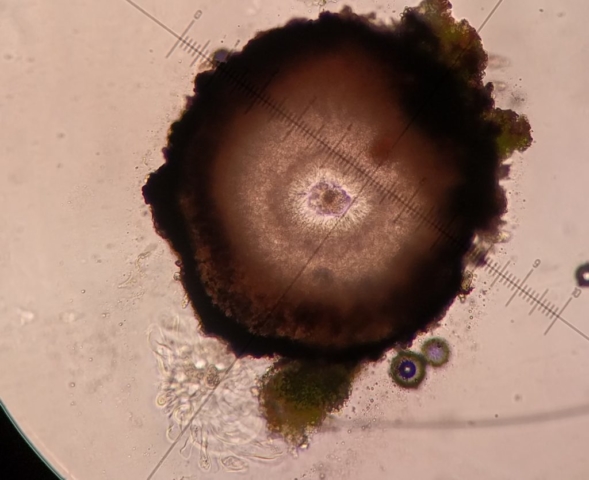 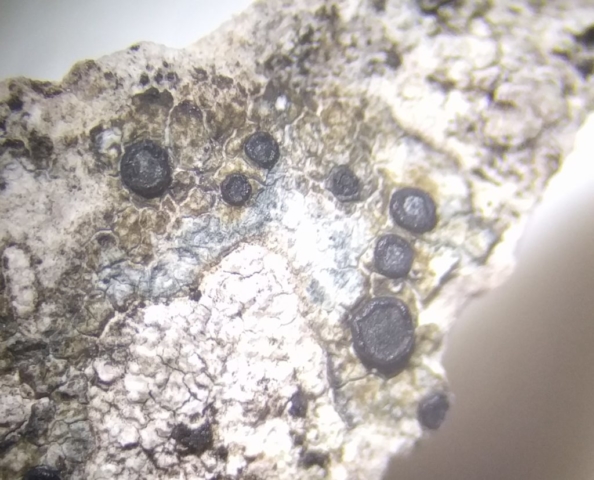 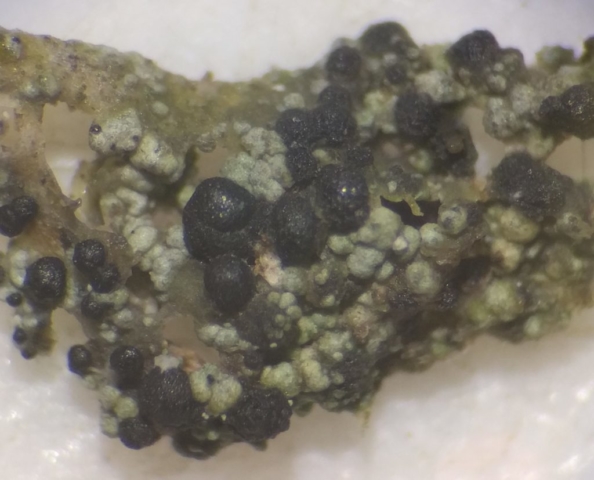 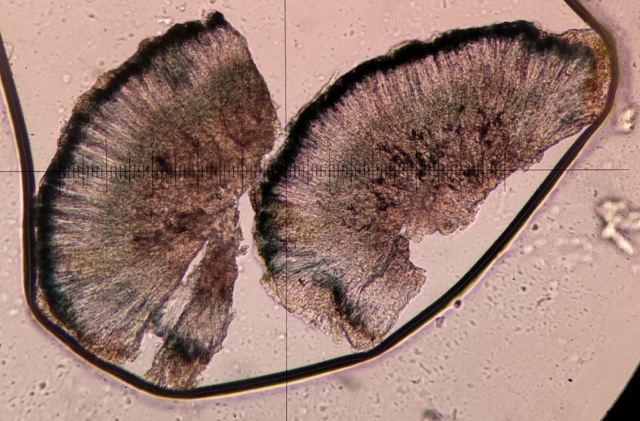 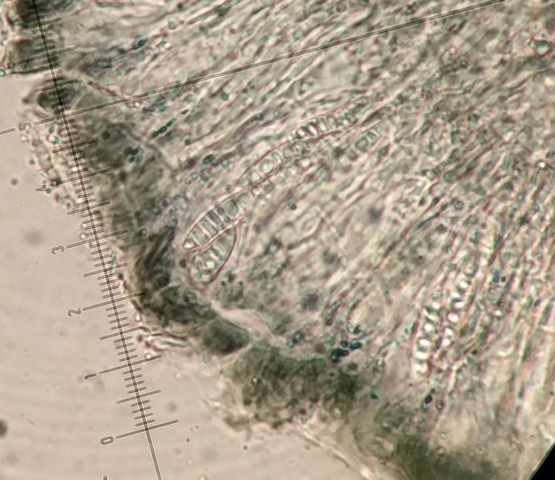 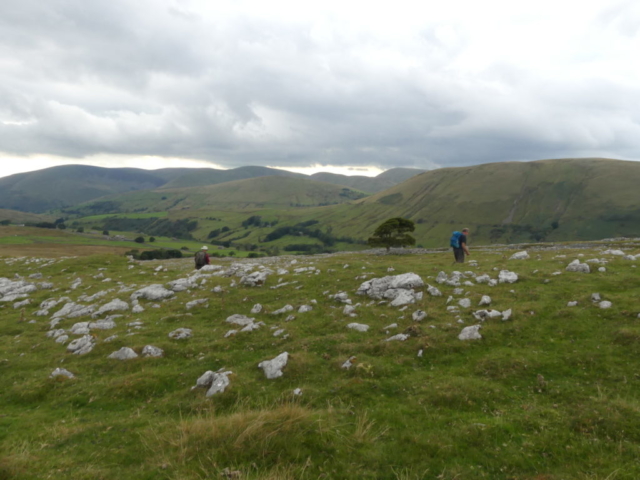 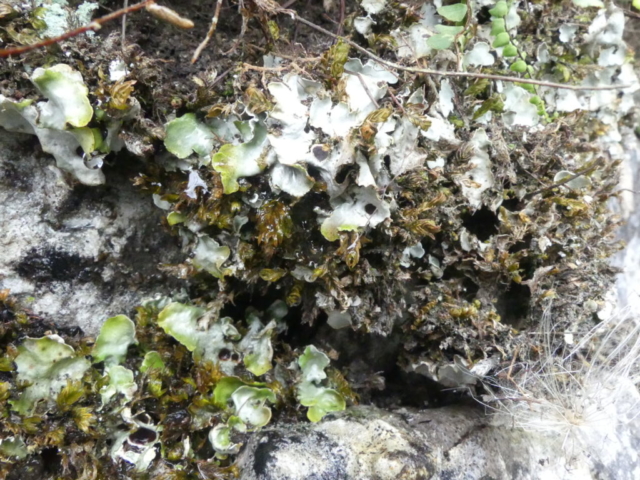 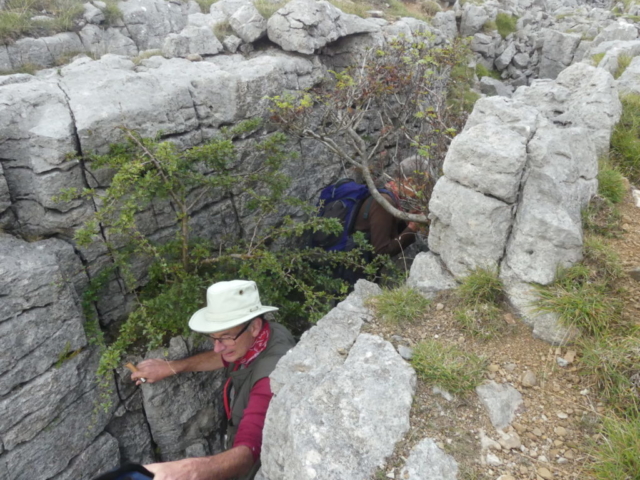 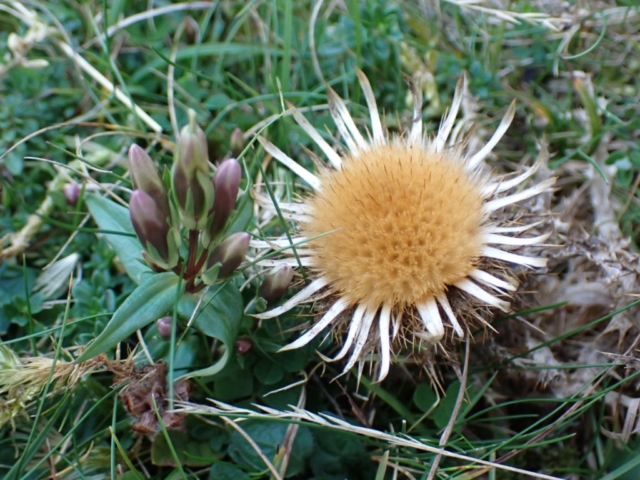