I’ve often wondered about canopy lichens: are the same species found at the top of trees as on branches lower down? Are the sticks I pick up from the ground representative of what’s going on above?

Storm Arwen gave an opportunity to find out. Strong winds (from the north!) barrelled down the Rydal Beck valley and caused mayhem with the trees around Ambleside. Woodland trees crashed like dominoes, many isolated veterans fell. Those on the roches moutonnées fared worst, especially the conifers. Local tree surgeons said there’d been nothing like it since 1989. Thankfully, I don’t think any of the special trees in Rydal Park succumbed. But it wasn’t just trees. Some were left without power for days; many houses needed roof work. Tragically, there was a fatality in Rothay Park.

But Arwen also brought the canopy within view. So a couple of weeks after the event I spent two days looking at twigs. In each of seven areas within a kilometre or so of the village I picked five fallen trees/ large boughs (in one area I miscounted and looked at a sixth tree!). For each of those trees I picked three “twigs”: the first I came to, the last I’d pass as I walked by, and the one in the middle that seemed to protrude furthest.  For each “twig” I tried to identify (and count) the species of lichen that grew on the outermost 70cm (the length of my folded trekking pole). Each species was counted only once per twig. Those that were unidentifiable in the field were taken home for microscopy.

In total I obtained 540 records, from 108 twigs. I managed to give 45 names to lichen: some were only identifiable to genus/group, often because they were too young to have developed reproductive features. I made no attempt to identify beyond “ Lecanora chlarotera sensu latu”. A couple of “mystery” specimens remain unnamed. I’m sure I missed some, and a more experienced lichenologist would no doubt have found more.

The “top ten” species (by number of twigs) are in the table below:

Perhaps there are no really big surprises. But I wasn’t expecting Parmelia sulcata to be the “most common” species. I was surprised at how frequent Melanelixia subaurifera was, and also how much Physcia aioplia there was. Young lobes of H. revoluta/afrorevoluta that didn’t display soredia mean they feature lower down in the top ten. Parmelia saxatilis wasn’t anything like as common as I was expecting: I’d never noticed its relative scarcity on twigs compared to branches/trunks.

The next table shows the species that were “bubbling under”, with between 10 and 20 records.

It was pleasing to note that Xanthoria parietina was not that common, but Caloplaca cerinella (also thought to favour nutrient enrichment) seemed very widespread.

And it’s here that absences/“rarities” begin to show up. Hypogymnia physodes was only found once (though maybe some of the young Hypogymnias were that species). Platismatia glauca was only found once, though was common enough further down twigs and on branches: it obviously doesn’t develop on the younger, thinner stems. Physcia adscendens, which I see relatively rarely in my home square, wasn’t found at all (though some of the young Physcia without soredia might have been that species).

Many foliose species commonly seen on tree trunks/larger branches only appeared once or twice, for example: Flavopermelia caperata, Normandina pulchella, Parmotrema perlatum, Hypotrachyna laevigata and Melanelixia glabratula. Melanelixia exasperata, which I’d previously thought of as being rare, occurred 5 times. Maybe it’s more common that I had thought. I found Arthopyrenia cineropruinosa  for the first time and found one specimen of Eopyrenula grandicula, a species not recorded in Westmorland until last year but that I’m beginning to think is relatively common in South Lakeland.

The mean number of species found per twig was 5. Eight twigs has no lichen visible on them, the most on any one twig was 12. Most of the trees looked at (26/36) were oaks. These proved to have a higher mean number of species per twig (oak mean: 5.53, non-oak mean: 3.6). No non-oak twig managed more than 9 species, though an impressive old cherry did manage 9, 8 and 8 species on its 3 twigs.

Whilst the mean species per twig was 5, it differed between twigs: that for both the first and third twig per tree was 4.7, for the middle twig it was 5.58. Perhaps the twig that sticks out the furthest gets more species of lichen on it than those lower down.

Examining trees in distinct areas enabled comparisons between the number of species found in each area. The two woodlands surveyed produced two of the three lowest mean number of species per twig, 2.5 and 4.66. Trees surveyed in woodlands were more likely to be “not oaks”, but discounting non-oaks still gave woods the lowest and third lowest means. So there would appear to be fewer species on woodland trees than those in parks/ farmland/ wood pasture.

Overall, there did not appear to be a relationship between the number of species and distance from the village. However, for particular species there may well be: Usnea subfloridana was not found in Rothay Park or on Stoney Lane, the areas nearest the village. As for nitrogen loving/tolerant species, plotting total of Physcia/Xanthoria species against distance from the village centre  suggested an inverse relationship, though it was not significant at 95% level.  It would appear that they are more common nearer the village and Rydal Farm, and less common further away and in woodlands. Whilst 7/10 Xanthoria records were near the village or farm, the widespread occurrence of Physcia species suggests nitrogen pollution is beginning to have an effect across a wider area: it may be worth exploring this further.

As ever, a simple study like this has thrown up more questions than it answered, as well as getting me looking at twigs more carefully. I’ve learnt something new about which lichens grow where on a tree; that some lichens I think are common are maybe less so and vice versa. It would be interesting to compare these results with trees from other areas, particularly further away from built up areas and in the Cumbrian lowlands. Roll on the next storm? No, I’m not asking for another one. 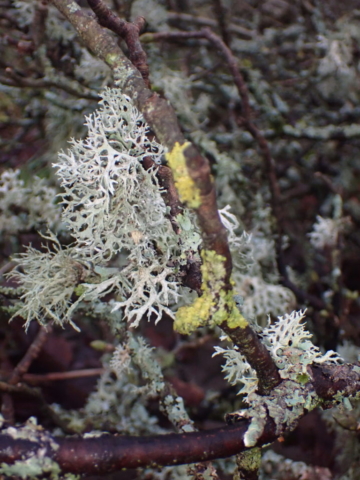 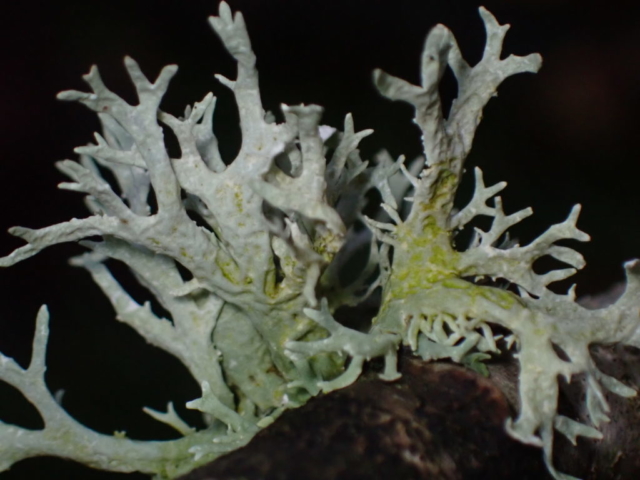 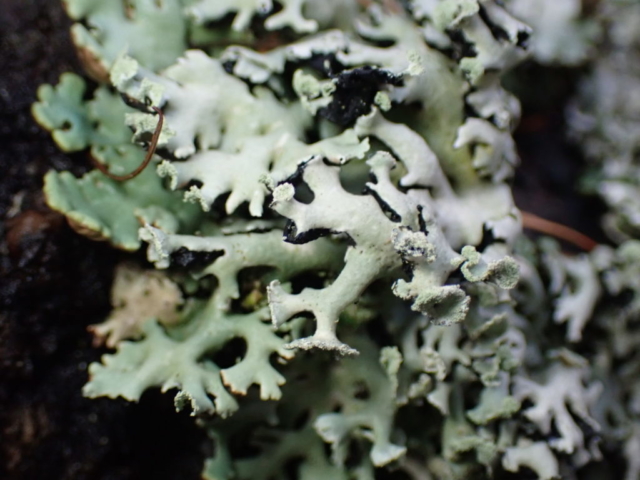 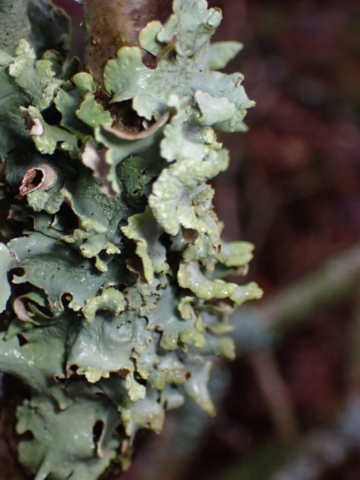 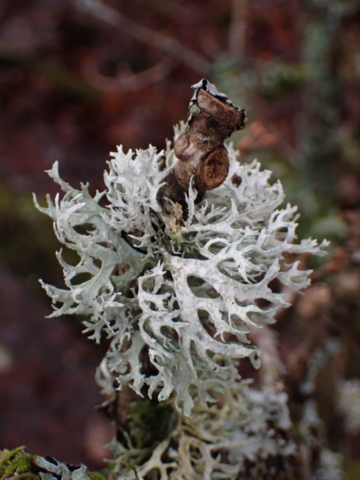 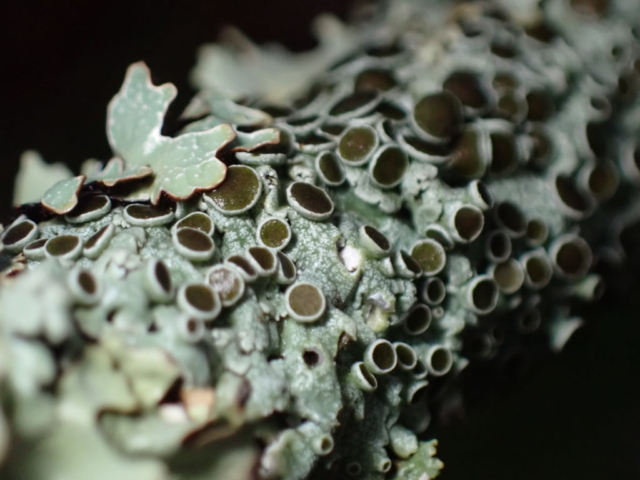 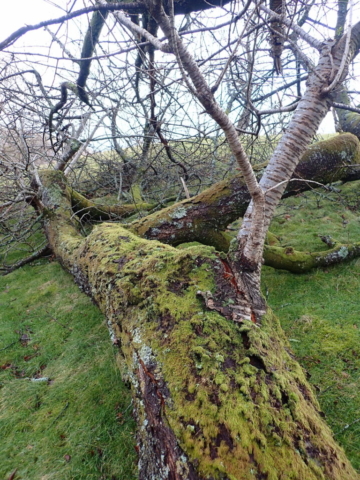