The Bryophyte contingent was smaller than recently with only four attending on a super blue-sky day. Thornythwaite Wood is owned by the National Trust and is considered one of their top five woods in Borrowdale for bryophytes.  Ben Averis produced an excellent bryophyte report for NT in 2017 and included target notes, grid refs and photos of many of the rarer species. We therefore decided to break with tradition and head directly to find interesting species none of us had seen before.

Thornythwaite Wood has more of the look of a fellside with scattered trees than a closed canopy woodland. This enabled us to walk to the target location without stopping as the bracken-covered fell had limited interest.

Our first stop was Combe Beck just above the waterfall. Here the beck was braided with numerous boulders. Clare and Gary quickly found a boulder on an island in the beck with Gymnomitrium crenulatum and Gymnomitrium obtusum growing in quantity next to each other. Clare then found Scapania compacta growing close by. We all had a good look and enjoyed this species, also found by Kerry at Glencoyne. As is typical of groups and rarer plants, whilst we all looked at the same boulder, some of the photos and specimens may well have been of other Scapanias. The compacta was later confirmed. (An additional species to Ben Averis’s very impressive list of 177 species.)

We then headed down stream past the waterfall to a rock detailed in Ben’s report on the west side of the beck facing east just below the waterfall. The photo helped to confirm the correct boulder.  On this boulder we all enjoyed seeing Colura calyptrifolia on the vertical face. This rare species is very small but also distinctive. On this same rock was Harpalejeunea molleri and a long list of other species including Lejeunea patens. Nearby we also saw Plagiochila spinulosa and Hygrohypnum eugyrium.

We then headed up the hillside to another Ben Averis location. Gary lead us directly to Ben’s location for Adelanthus decipiens which we all admired and photographed. Only one clump. Just below it were a scratty few strands of Sematophyllum micans, mentioned in Ben’s report. We were fairly doubtful but Gary confirmed one strand later.

We then walked south and climbed towards Glaramara and then headed west down into the valley above Seathwaite Bridge. We then followed a small gill down the steep fellside towards further Ben Averis locations. On the way we saw Mylia taylorii, Frullania tamarisci growing unusually in a wet flush, and Sphagnum inundatum (but not conclusively identified!).

Using Ben’s photos we located Bartramia halleriana which unfortunately lacked capsules making recognition more of a challenge. Nearby was Plagiochila punctata. We looked carefully for Herbertus hutchinsiae but despite having a photo and grid ref we couldn’t locate. This distinctive drought intolerant species was possibly much reduced by last years dry spring and summer.

We then headed further down the same slope and located another Ben Averis site, a stone by the stream under an ash tree. This had some good colonies of Plagiochila exigua which would appear to have increased in quantity from 2017. This was also a new species for us all which we were very pleased to see. A rare but distinctive species. The stone also supported Lejeunea patens and Lejeunea cavifolia. In this general area we also saw Hygrohypnum subeugyrium and Fontinalis antipyretica.

As the sun was about to set we headed down the slope and walked along the footpath back to the car park. Thornythwaite Wood is a very good bryophyte location and we all felt it would be worth a further visit. 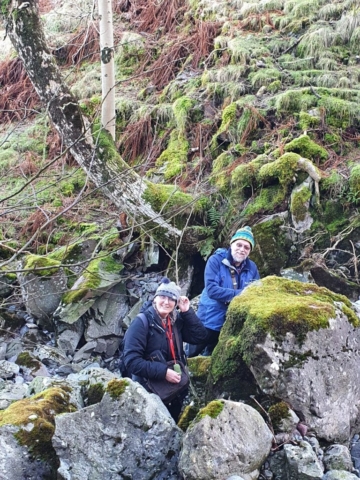 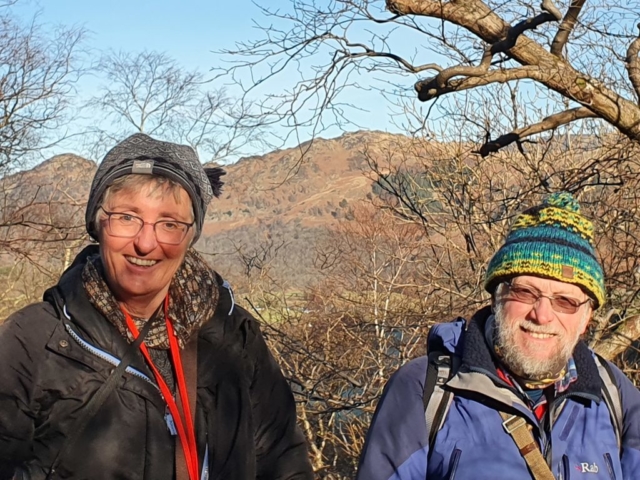 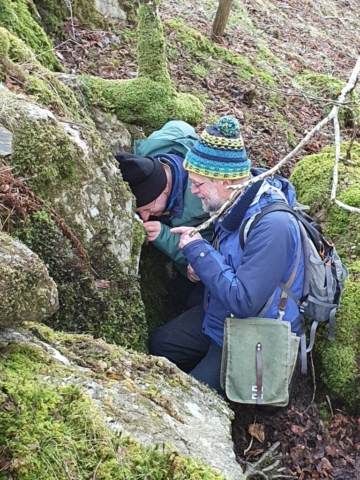 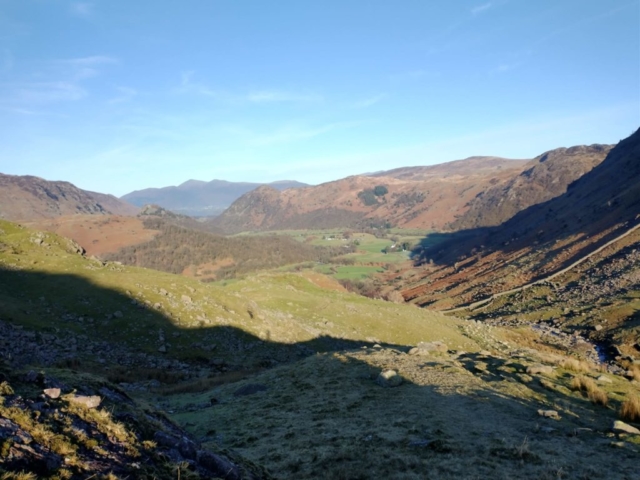 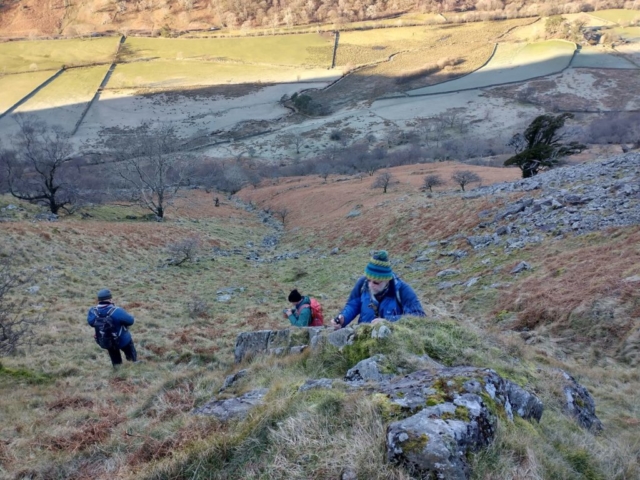 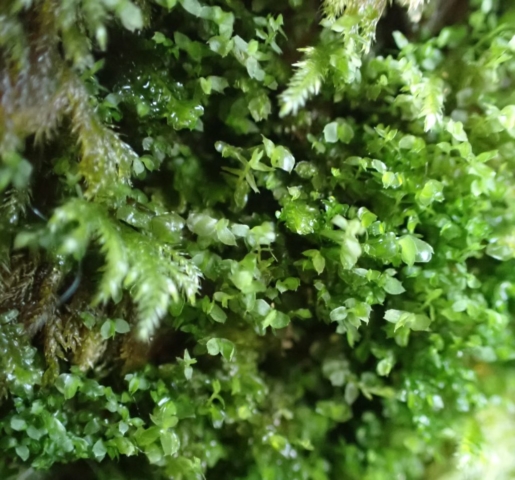 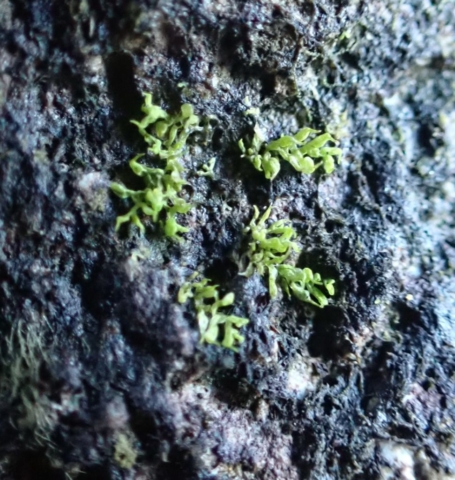 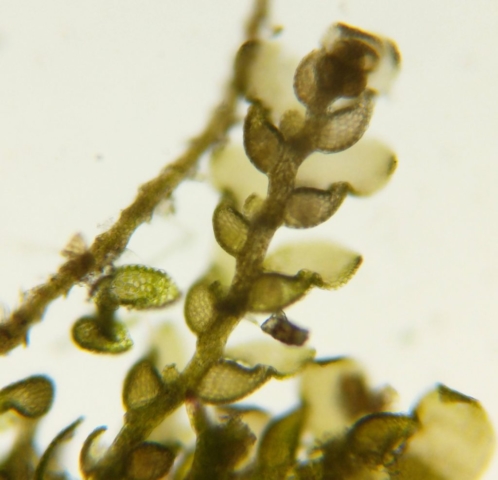 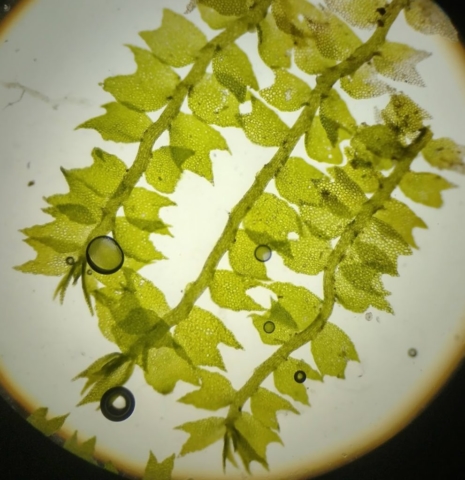 On a cold and frosty morning, seven lichen hunters gathered in the car park at Thorneythwaite. And quickly realized we were on the cold and shady side of Borrowdale, as golden sun lit up the fells and Seathwaite woods. Ho hum. The frost never melted for us all day.

Ivan Day had compiled a site list for the National Trust in 2017, so we were following in illustrious footsteps. And it was obvious that we weren’t going to be able to cover anything like the whole of the area. So where should we go? Well, we started off with the nearest area: the acid-barked oaks at the north end of the wood. There were some good examples of the Parmelion community, including coral-like Sphaerophorus globosus and leafy Cetrelia olivetorum, red-flecked Mycoblastus sanguinarius and the chunky jam tarts of Ochrolechia tartarea.  We found good quantities of the barnacle-like Thelotrema lepadinum. A new species for the site was Micarea alabastrites, with white apothecia and a C+red reaction. The trees proved ideal for showing less-experienced members of the group some important lichen features. They, in turn, noticed that we performed a dance around a tree in the sun. By-catch included an impressive moth that turned out to be a Spring Usher.

After a lunchtime sitting in the relative warmth of the sun , we headed off back into the shade in search of an ash tree where Caz had found Nephroma laevigatum some years ago. If you don’t know it, it’s a smooth and leafy member of the Lobarion community. And it wasn’t on Ivan’s list. We found ash trees and Peltigera horizontalis, and more Thelotrema lepadinum. Heading south there were more hazels, which gave us Pachyphiale carneola. Protopannaria pezizoides was found on a mossy log: it well deserves its name of “lentil bake lichen”. And we disturbed a barn owl (sorry, but how was I to know there was a hole in the back of the tree I was looking at?).

We had a grid ref for Caz’s Nephroma, but that covered 100m x 100m of slow-to-move-across boulders and trees. Chris found an old ash pollard with the antiseptic smelling Parmeliella triptophylla: maybe we were getting close. We headed up slope a little and then came the cry from Paul: had he found the Nephroma? Yes, there it was, with a little more Parmeliella and lots of Normandina pulchella, Thelotrema lepadinum and Peltigera horizontalis on the same tree: a good example of the Lobarion community.

Time was getting on: but maybe there was enough light to try for the Sticta sylvatica Ivan had found in 2017? We contoured further south, passed the bryologists in the beck and came to the old elm under which the Sticta had lingered on an outcrop. But, sad to say, the elm had toppled over, and we couldn’t find any sign of the Sticta. There was lots of the frilly jelly lichen Leptogium lichenoides however, and the similar but smaller L. teretiusculum.

The journey back to the cars through lovely evening light gave us more Nephroma laevigatum on another ash pollard. A barn owl flew across; was it the same one as earlier? Thorneythwaite had proved to be a great site, with plenty of scope for other visits. But then we seem to say that every time we go anywhere! 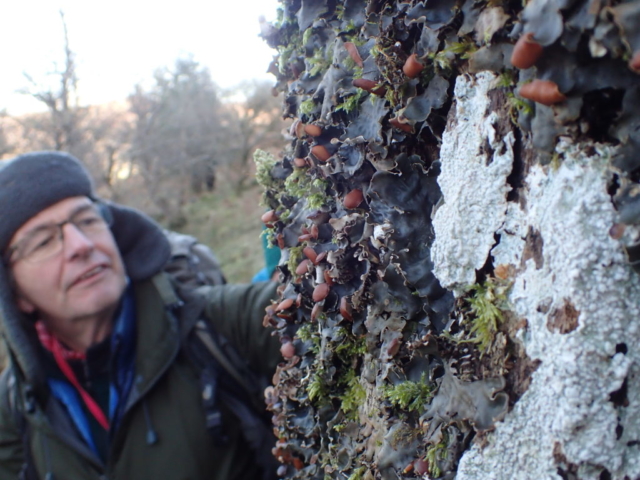 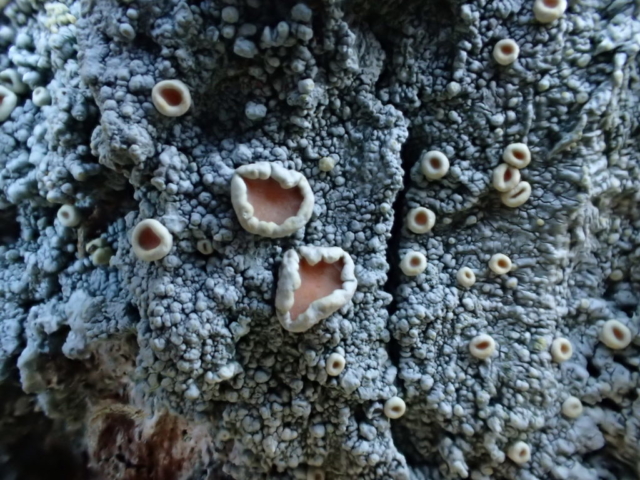 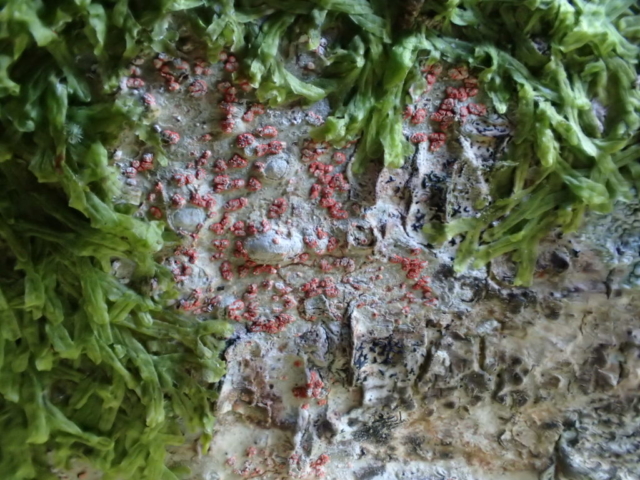 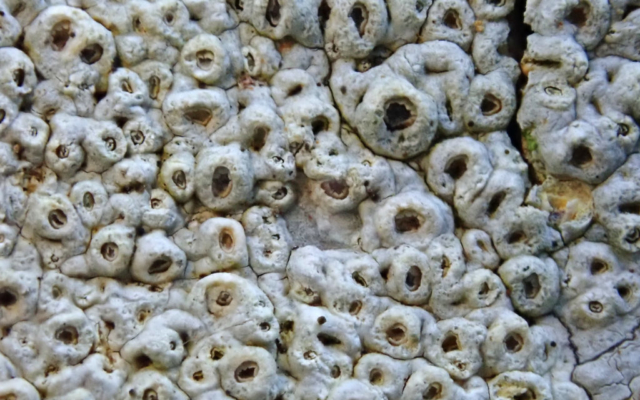 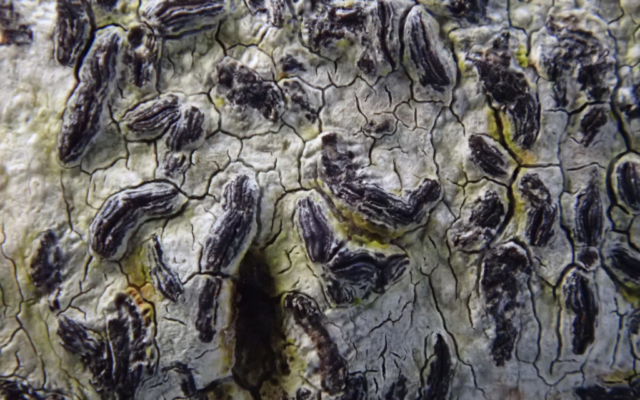 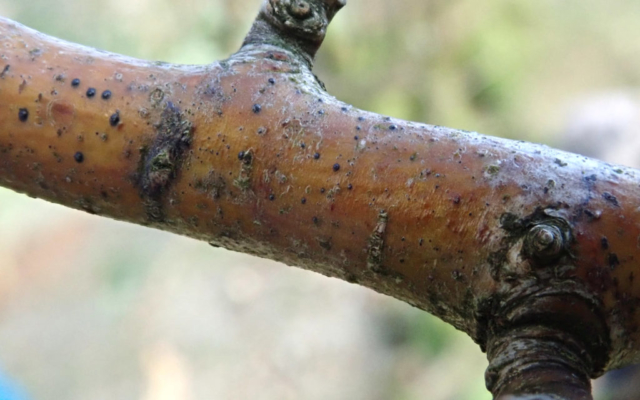 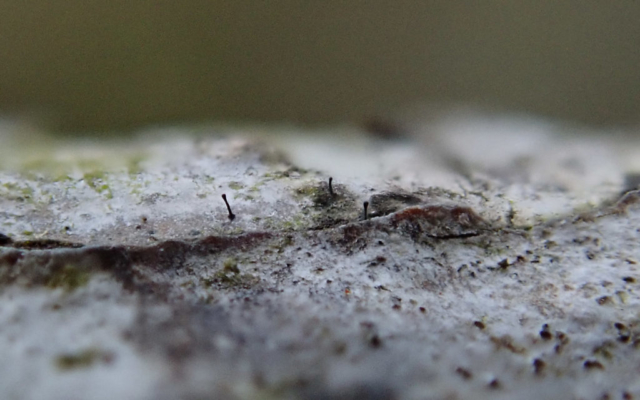 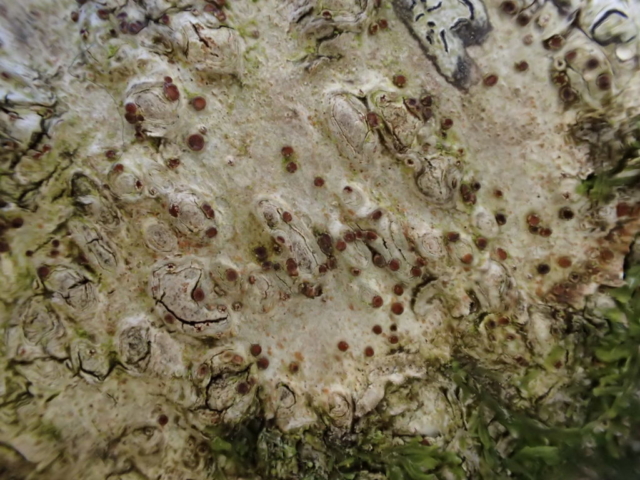 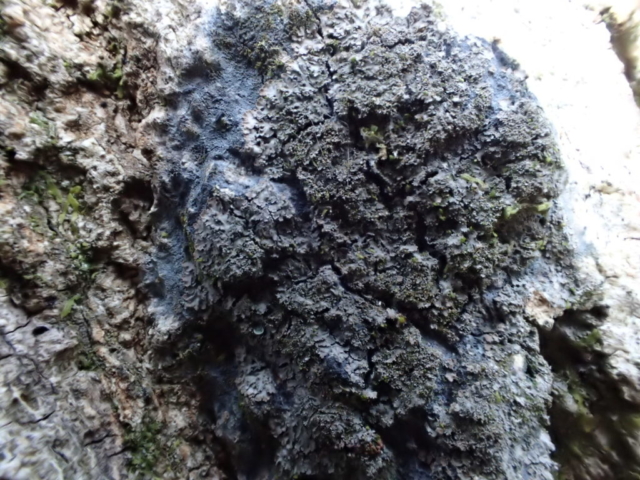 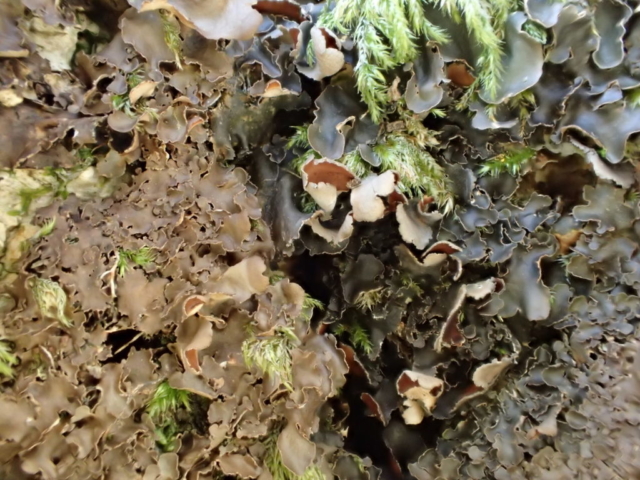 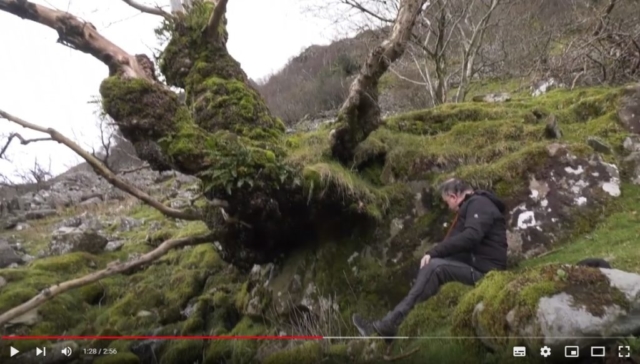 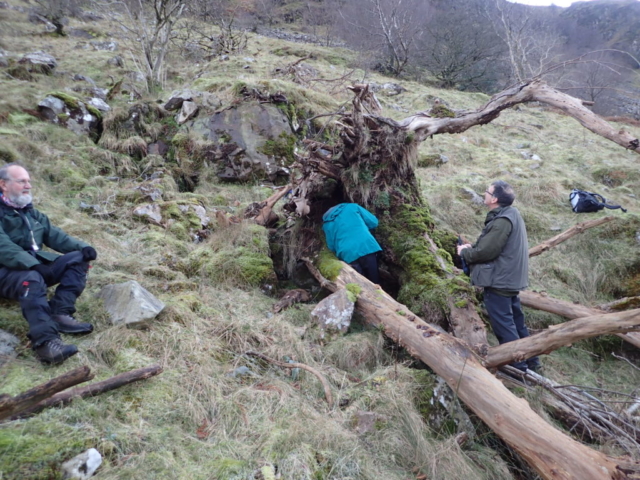 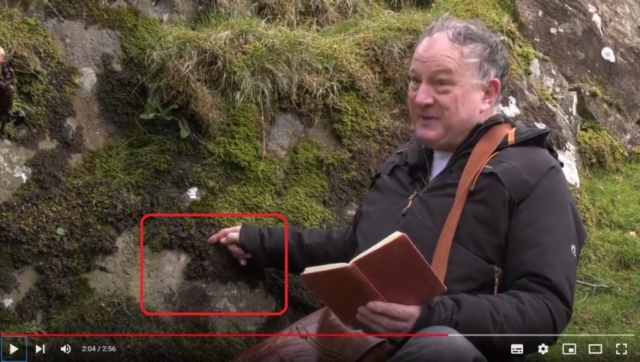 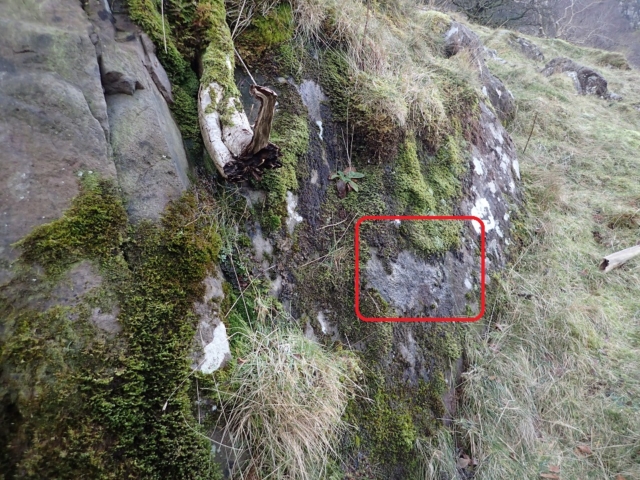 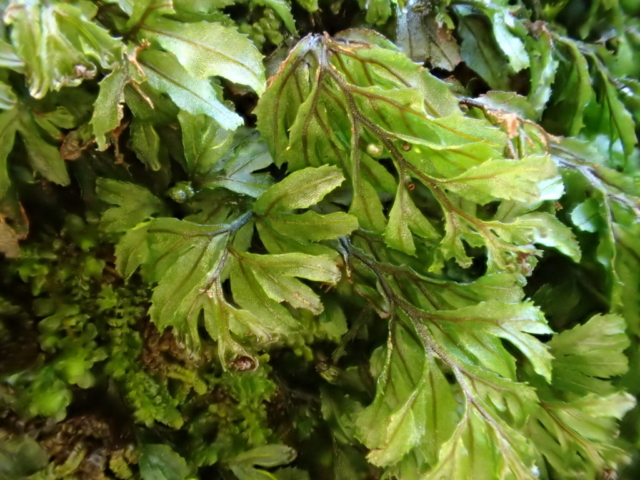 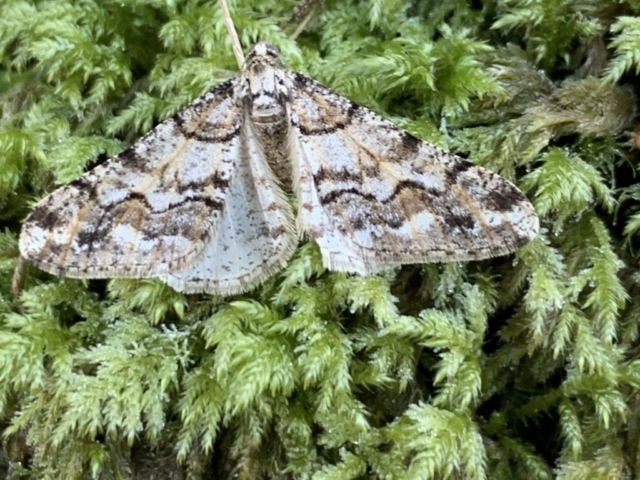