2020 was a difficult year. Covid disrupted the usual routines; courses and face-to-face meetings were cancelled; injury affected lots of things too. Thank goodness for lichens! Shortly before the first lockdown began, Chris Cant produced maps of lichen records in Cumbria, including the number of records for each square. So many squares had no records…

… and even in my relatively well-surveyed home 10km square (NY30- Ambleside area) nearly half the monads seemed unvisited. Shortly beforehand, I had started sending in lichen records to Janet Simkin at the British Lichen Society (BLS). So it seemed like a challenge was being laid down: I’d try to record from all the 1km squares in my home hectad.

Needless to say, I failed in my attempt to visit all the squares in 2020: recurrent injury put paid to that. But by summer 2021 the project was complete. There’s over 3000 records on the BLS database and I can safely say that local square recording is a great way to explore an area’s lichens and habitats. I have moved out of the woods and spend more time looking at rocks and walls and buildings. And that desire to get to grips with what I can find locally has significantly improved my identification skills.

Partly because of this, comparisons of the numbers of species found in different squares (and so on) don’t really bear scrutiny: I made no attempt to make visits comparative. But a quick glance at the records shows the only lichen found in every square was Parmelia saxatilis, though Rhizocarpon geographicum (91 records) wasn’t far behind. I was fairly pleased by the “rarity” of Xanthoria parietina (53 squares): maybe nitrogen pollution isn’t quite as overwhelming as I sometimes fear. I found Normandina pulchella in a perhaps surprising 74 squares. That can’t just be because it’s very recognisable: there must be a lot of suitable habitat for it.

Along the way I found lots of interesting lichens: a new site for Sticta fuliginosa s.l. (in a quarry used by outdoor activity centres); the first Bunodophoron melanocarpum and Micarea alabastrites in the South Lakes, the first Gyalecta derivata in Westmorland. And “just outside the square” were a new crag with Umbilicaria crustulosa and a new site for Lobaria virens in Langdale. But more importantly I have learnt a great deal about the lichens of the area and their habitats. I might not have found any “new” woods overflowing with Lobarion, but I’ve discovered hitherto unsuspected basic crags in acid-rocked valleys, and developed an interest in old barns. Peltigera leucophlebia turns out (to my surprise) to be not uncommon on the fells; once I got my eye in Anisomeridium polypori is often to be found on older trees.

There have also, of course, been memorable human interactions: the potential Samaritan who saw me lying by a rock and stopped their car in the middle of a usually busy road to check I was Ok; the young man from Wuhan touring Britain in the midst of the first lockdown (!); the man who was delighted when I showed him Stenocybe septata on an old holly and taught me the Gaelic word “Eolas”, knowledge gained by experience. An apt word for lichen hunting?

As an obsessive walker, cyclist and explorer I thought after nearly 20 years that I knew my local area pretty well. But the need to visit each square kilometre has had me visiting paths and tributary valleys I never knew existed; exploring the little grove of oaks I can see from my window that has never been on the way to anywhere (a nice patch of Sphaerophorus globosus since you ask). And then there’s what I call the lichen by-catch: the first wood warbler of 2020, migrating whooper swans crossing the fells and purple hairstreaks in Langdale.

Questions have been thrown up: whilst so many woodlands have Hypotrachyna laevigata, why is it often on just the one tree? Why is Physcia adscendens so relatively (only 5 squares) rare here? And realisations have been made made: the lichens of basic rocks are pretty widespread thanks to lime mortar creating suitable little “cliffs”. How woodland rocks must have been a vital refuge over the centuries of coppicing and clear felling: Ochrolechia androgyna, Sphaerophorus globosus and Mycoblastus sanguinarius (amongst others) could survive on boulders and cliffs when there were no trees.

So what’s the next project? Shall I go south to SD39, or south east to SD49? Or maybe I should follow the example of peak baggers and do another round? For if the year and a bit of monad recording has taught me one thing, it’s that there is an almost limitless scope for getting out and exploring the many and varied habitats of my local area, learning about its species and trying to understand their ecology. And how a relatively small area, albeit a very varied one, can hold my interest. 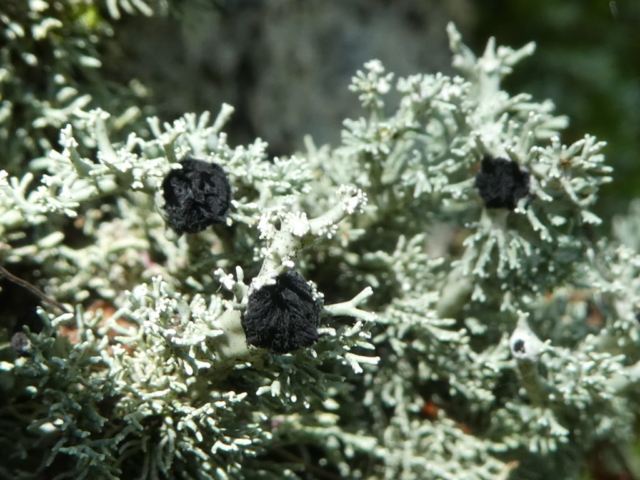 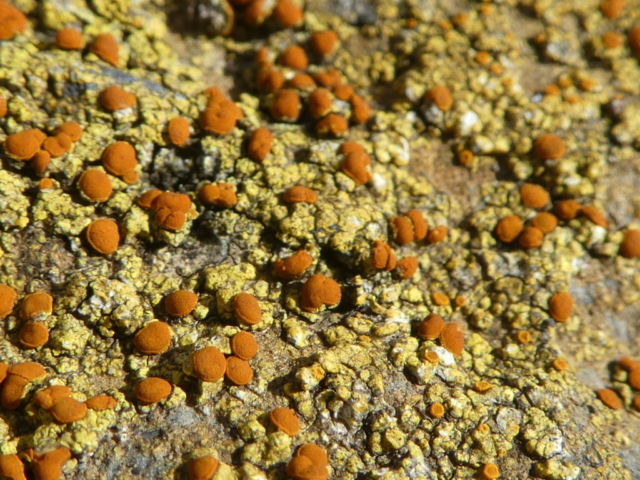 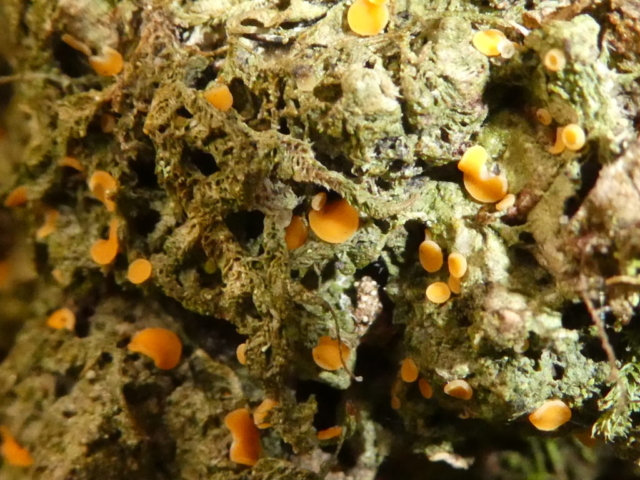 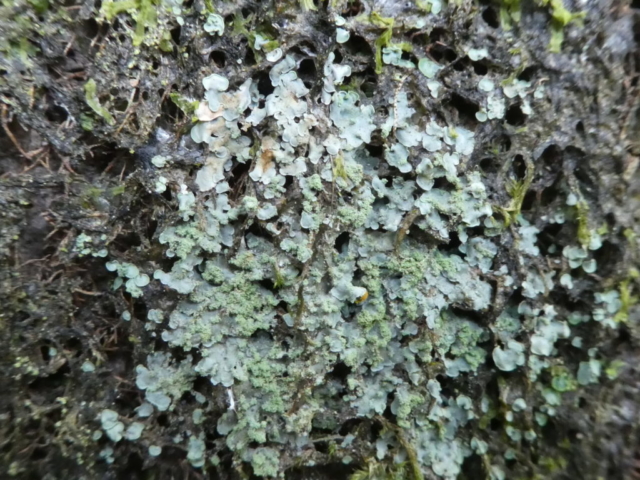 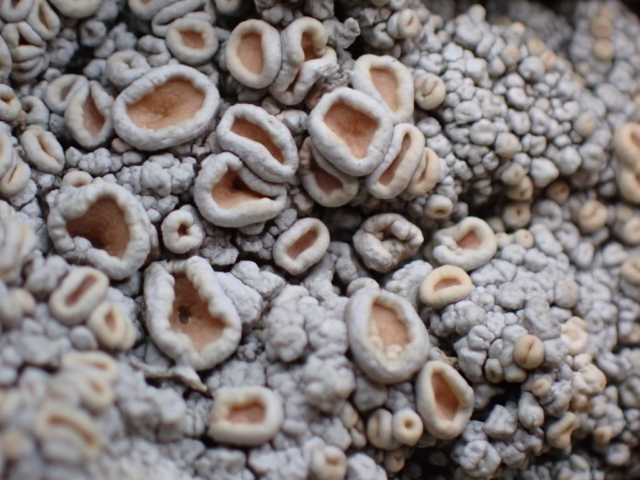 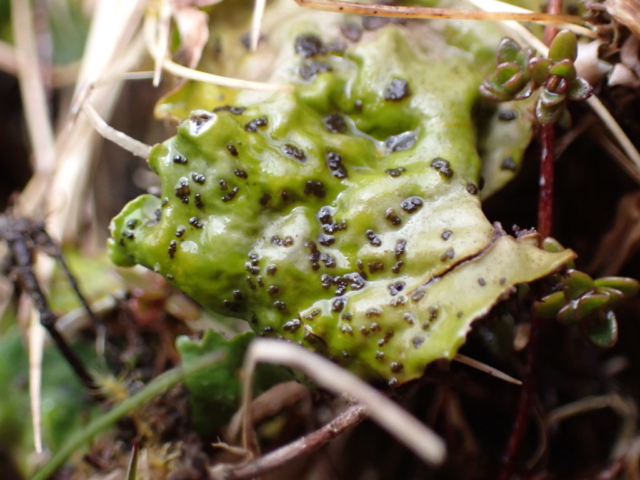 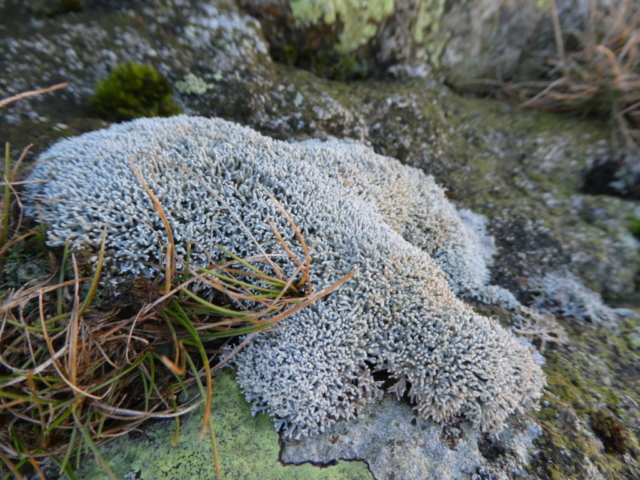 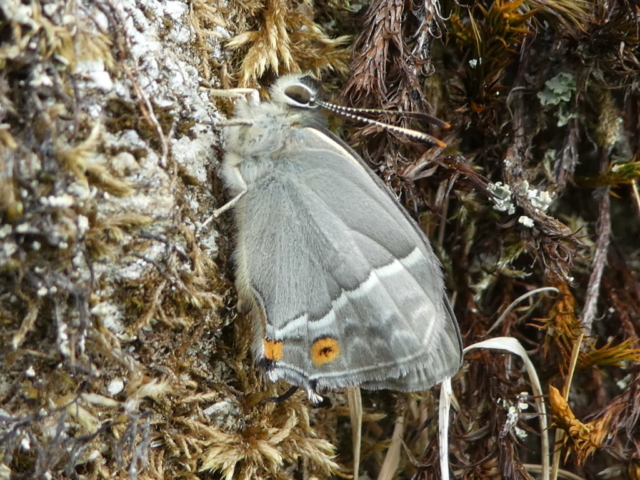