There are many lichen habitats in Cumbria, some literally on your doorstep. However, if you want a walk then there’s potentially lots to see while out on the fells and scars of the Lake District and the Pennines. The species I’m showing here don’t need a hand lens to see. With your eye in, you can spot them en route. If you have time and a sunny day or flask, then do take a breather and stop to have a closer look. If you are more adventurous, do visit ghylls, crags and the spoil heaps outside old mine-workings – but do take care.

Most lichen species have a preference for either acid or basic geology with some only found high up on montane heaths. Just as we look at geological maps to see what lichens are around, geologists have been known to look at the lichens to determine the rock type!

Limestone is a basic (alkaline) rock which forms outcrops called scars – and flat pavements of clints (stones) and grykes (the gaps between). Limestone pavements can be great for specialised plants. In the past stone may have been robbed out but many areas are now protected.

Many of the limestone specialist lichens are crusts which can be hard to identify. On our local patch, Knipe Scar, there’s lots of Squamarina cartilaginea with green squamules .  If you look carefully you might see Solorina saccata on the vertical sides of the clints. It’s easy to see why this species has a common name of Chocolate chip lichen. On our local patch, Knipe Scar, I’ve taken photos six months apart; you can see the brown fruit less developed in one area in the inset photo.

On the short turf beside the pavement, you might find Peltigera leucophlebia or ‘fleb’ as we’ve come to call it, usually with green lobes with small black warts on. There is a similar green lichen P. britannica but this is rarer and not on basic rock; we have re-found this species at a couple of sites in the Lakes. 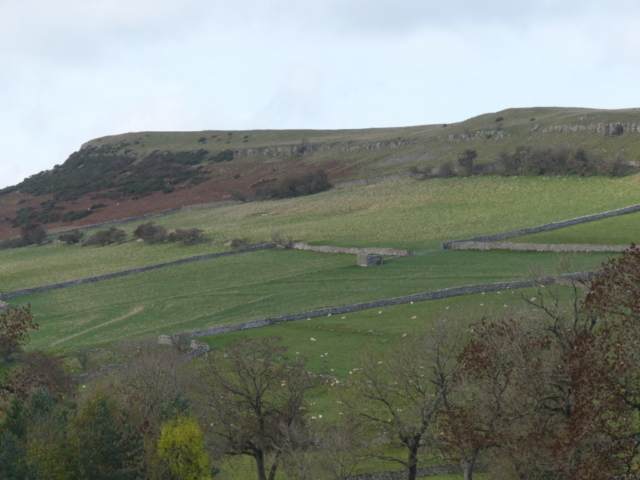 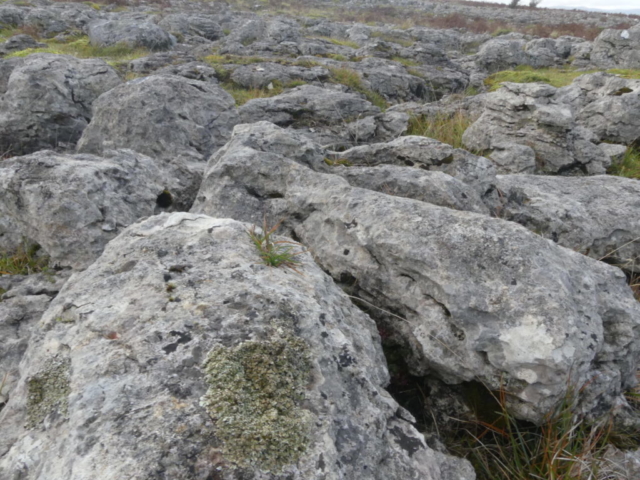 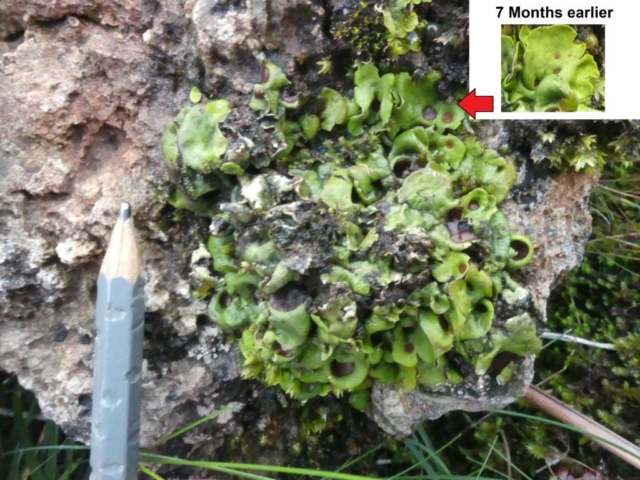 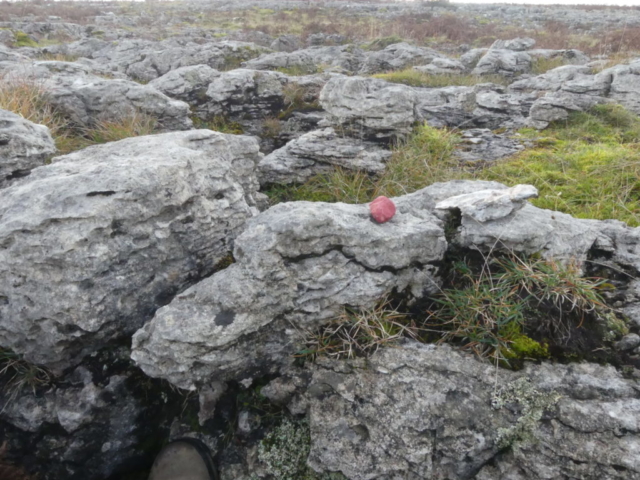 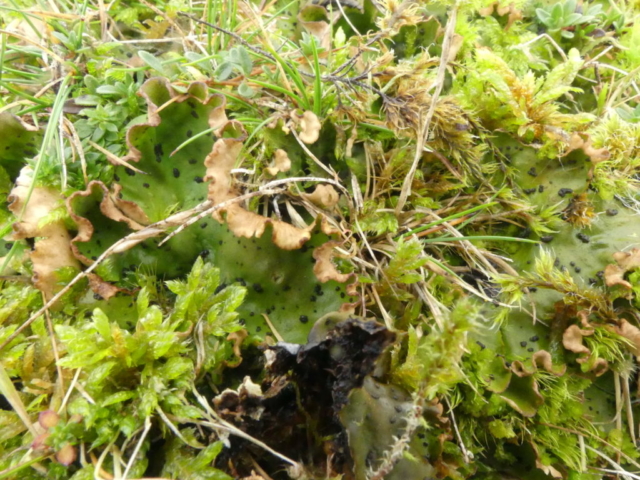 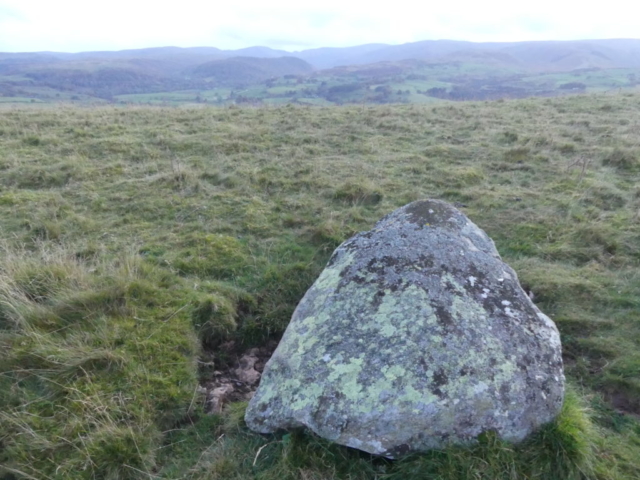 The geology of Cumbria can be pretty complicated, but most of the fells are acidic /siliceous / volcanic rock. There are still plenty of places with basic flushes, so you might find Peltigera leucophlebia for example amongst the crags. And vice-versa, you can find erratic siliceous boulders on limestone.

If you look on the rocks around you, you will often see Stereocaulon vesuvianum, looking a bit like a mini-eruption from Mount Vesuvius, or map lichen Rhizocarpon geographicum usually looking yellow/green with black borders between the ‘countries’. Another common species is Parmelia saxatilis. Some species found on trees are also on montane rocks as well as heather, eg Platismatia glauca and Hypogymnia physodes.

On some rocks you might find Lasallia pustulata which is one of the species called ‘rock tripe’ which I’m told is edible – I’ve never tried it but it does look a bit like a poppadom! This is whitish-grey when dry but is green when wet, which got me very perplexed once.

Ophioparma ventosa, blood-spot lichen, is fairly common on acid rock, with the main thallus either yellow-ish or pale pink. The red fruit are lecanorine, which means the pale thallus forms the exciple margin of the apothecium, providing a jam-tart-in-pastry look.

Another genus you might find is Sphaerophorus with species S. fragilis and S. globosus found in Cumbria, both with a coral like appearance, occasionally found with black eyed stalk fruit, but often grazed by slugs!

As you get a bit higher, on rocks you might see various Umbilicaria species such as Umbilicaria cylindrica. If fertile these have amazing gyrose fruit ie with spiral patterns. U. cylindrica is usually gray with prongs on the margins. The rarer U. polyrrhiza is a lovely pale chocolate brown with a mass of black rhizines underneath. In Langdale there is the main site in the UK of nationally rare Umbilicaria crustulosa.

Also higher up, but usually quite small, is the lovely Cornicularia normoerica. 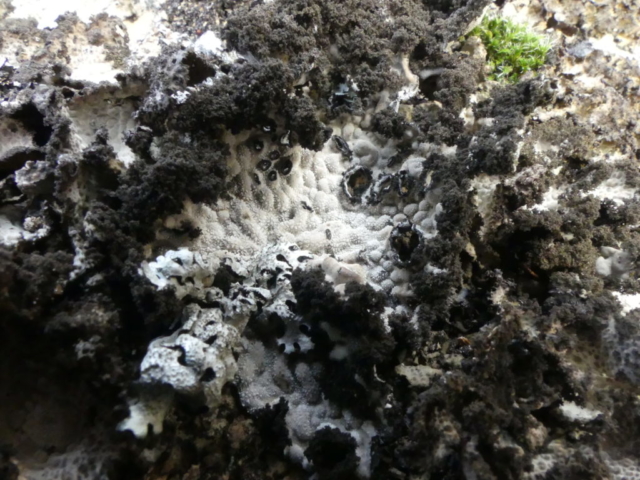 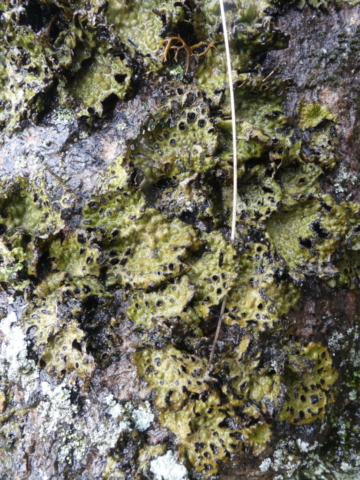 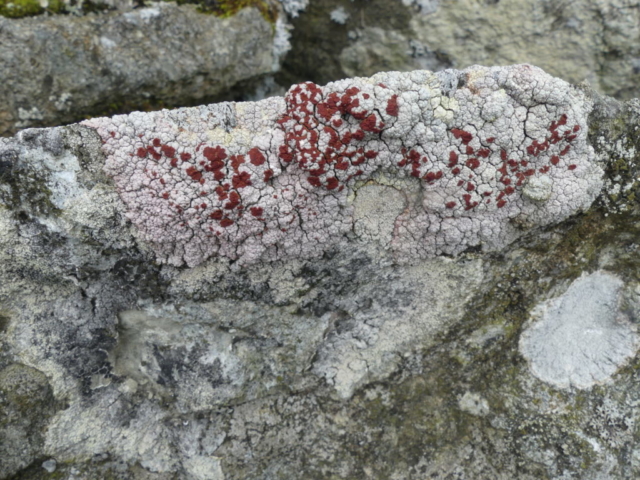 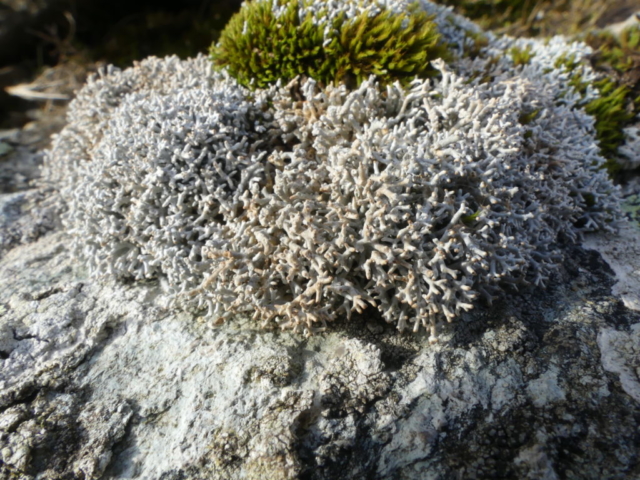 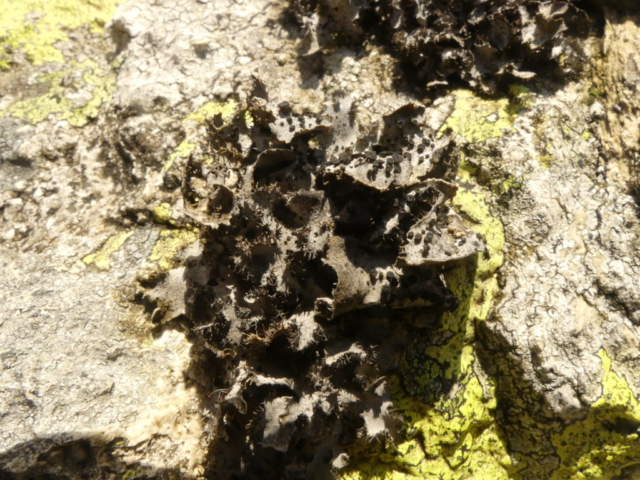 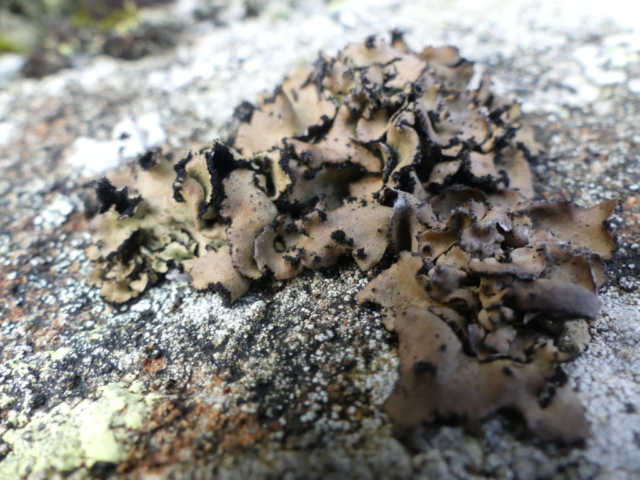 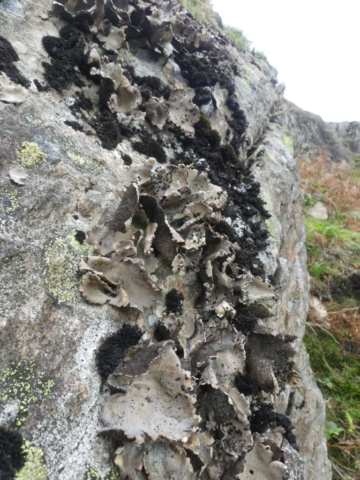 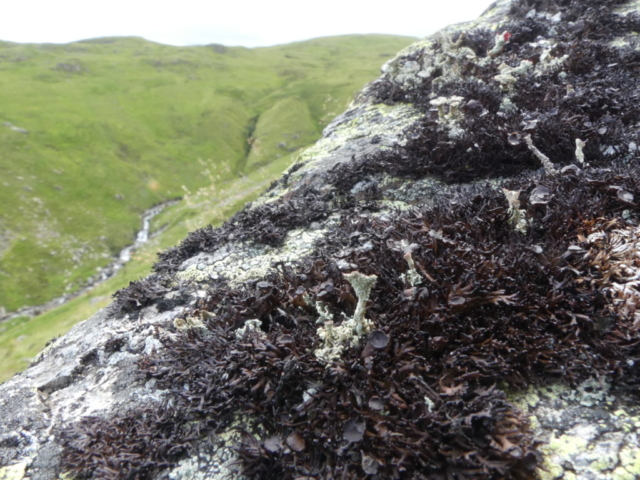 The tops of the Lake District fells and some parts of the Pennines have harsh conditions that resemble the arctic. Here, the heather and grass don’t grow very tall as they are lashed by the wind and rain. Where you see the nets of Cladonia portentosa and tubes of Cladonia uncialis you are in the right sort of area. Sometimes these species can be found lower down, alongside Cetraria aculeata.

This ‘wind-clipped heath’ on the fell tops is a precious habitat so if you find it, don’t trample around too much.  Species that do well in more northerly latitudes can be found here, such as Thamnolia vermicularis, Cetraria islandica and Ochrolechia frigida. Our map for Thamnolia shows the sort of places you can look, but new sites are still being found in the Northern fells. Recently I found a loose fragment of C. islandica on the top of High Street in the eastern fells, possibly pulled up by a corvid. This would be a new site – but exploring at the time and on a subsequent visit, we couldn’t find where it came from.

Text and photos by Chris Cant 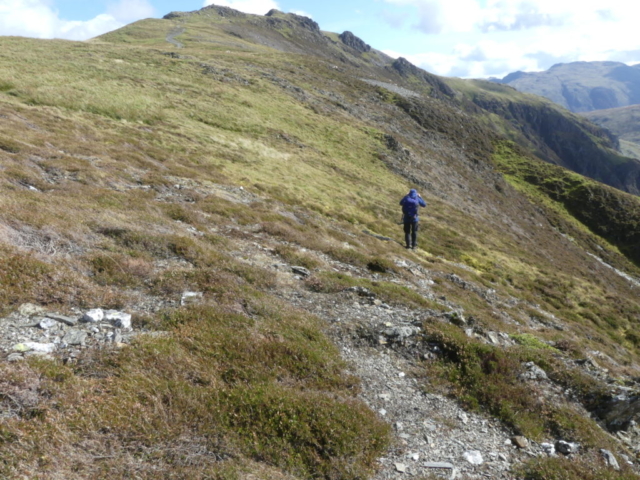 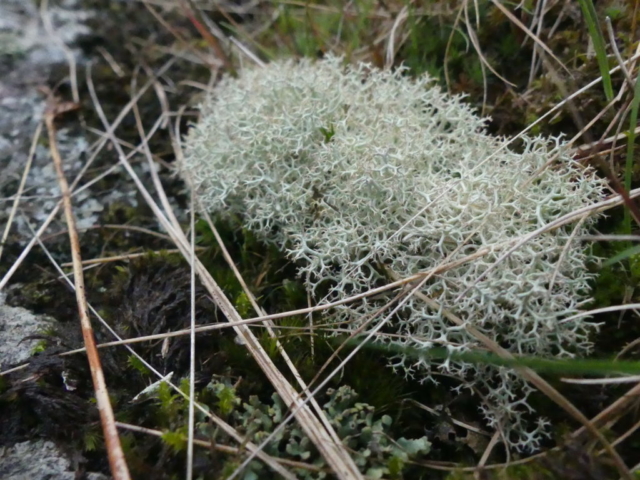 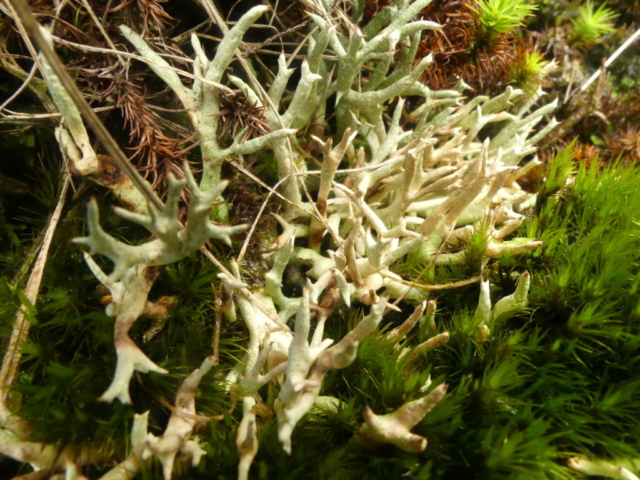 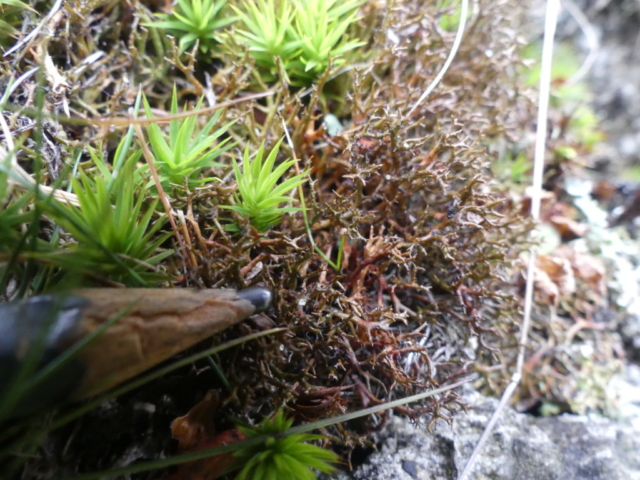 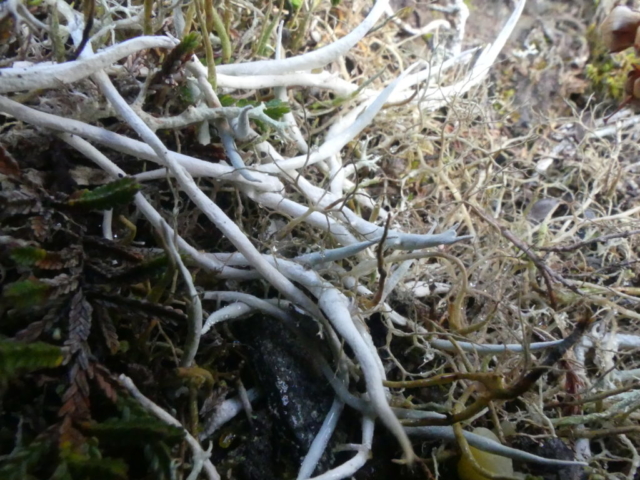 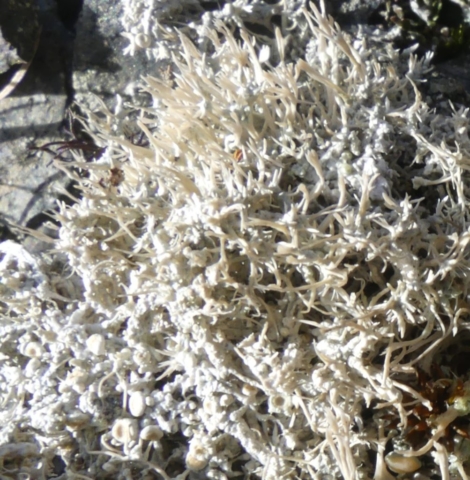 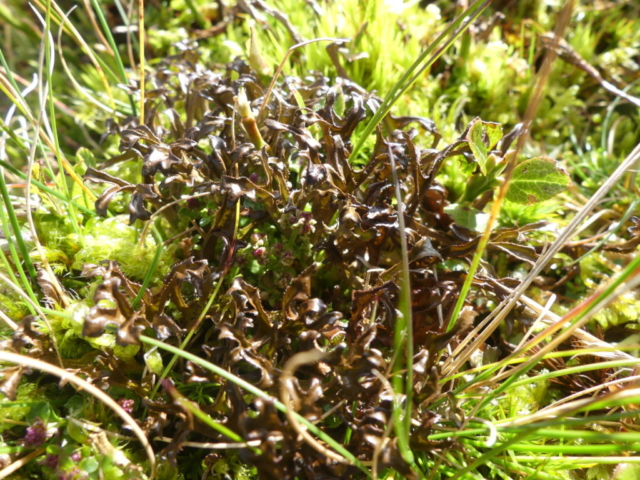 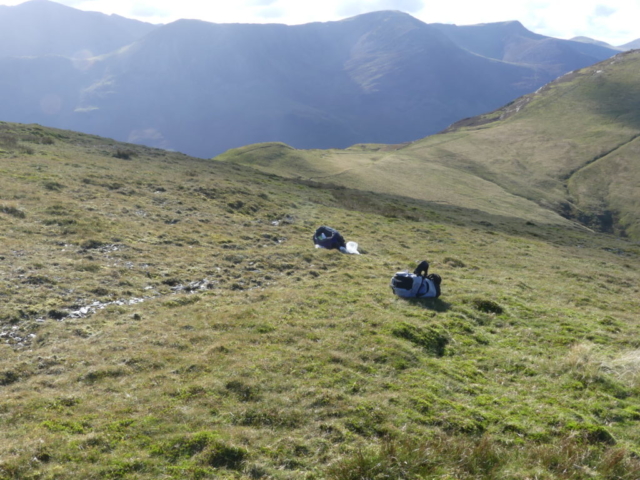 The Cumbria Lichen and Bryophyte Group has been short-listed for a group award in the NBN Awards for Wildlife Recording 2020! These annual Awards recognise and celebrate the outstanding contributions adults and young people are making to wildlife recording and data sharing, which is helping to improve our understanding of the UK’s biodiversity.

We’re one of five groups short-listed for the award and we are very pleased to reach this stage so soon after setting up. Thanks very much to April Windle for entering us – and for her outstanding help while in Cumbria as the Plantlife LOST project officer. She enthusiastically commented, “so flipping deserved – you are AMAZING!”. Our group outings have currently stopped due to Covid-19 but members and others are keeping in touch using the Cumbria Lichens and Cumbria Bryophytes Facebook groups.

We record sightings on group trips and submit records individually. Bryologist members are the regional recorders for VC69 and VC70. Lichen group member Chris Cant has produced very useful interactive lichen distribution maps for VC69 and VC70. Over the winter of 2018-19, Pete Martin visited 20 woodlands in southern Lake District doing Rapid Woodland Assessments while also counting the number of indicator lichen species he could find – more info. Species found during the LOST project brought the national British Lichen Society to visit the wood pasture at Rydal, Ambleside, in 2019. Clare Shaw found Pale scalewort moss Radula voluta at Frith Wood in December 2018 which has led to moves to protect the woodland. Member Russell Gomm first reported lichen records while working here in 1974; his interest has been re-awakened and he is now finding new records on his local patch near the Solway. Increased awareness of lichens and bryophytes with conservation managers has led to efforts to translocate internationally important lichen Lobaria pulmonaria on fallen trees brought down in storms of February 2020. The group has raised concerns about a planning application which may affect bryophytes, lichens and ferns at Stanley Ghyll.

Caz Walker says, “A good species distribution map is worth its weight in gold: it allows us to track down things we haven’t yet seen (part of the long learning process) as well as refinding old sightings to confirm continuity; it allows at a glance an assessment of the habitat type and quality once one knows what to look for; it shows many blanks on the map of areas not yet well recorded which is an incentive to visit.  Putting good quality records in the public domain is so important and helps others to understand and protect the natural environment.”

You can see what has been found for an area on NBN. Lichen species are listed in the Fungi group. Bryophytes are within the Plants category.

And the winners are…

The well-deserved winner and runner-up of the Group Award in the 2020 NBN Awards for Wildlife Recording are:
* Winner: The Mammal Society
* Runner up: Manhood Wildlife and Heritage Group 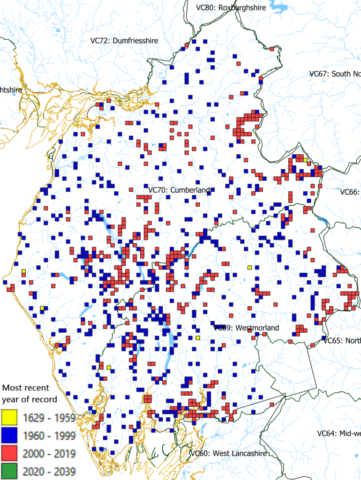 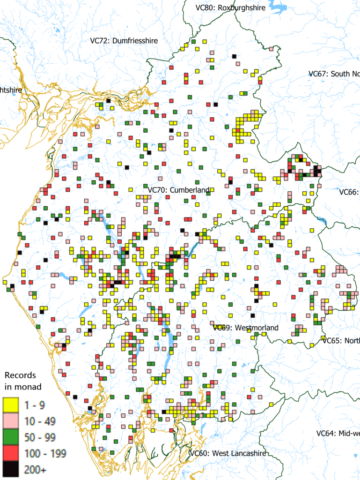 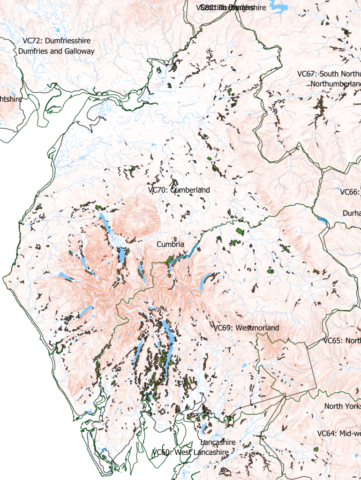 Caz Walker and I ‘discovered’ lichens last year. First, Caz volunteered to be trained up as a lichenologist in the New Generation Botanist scheme, part of the Plantlife ‘Looking Out for the Small Things’ project which was particularly looking at the Atlantic woodlands of the Lake District and Cumbria. Then I was drawn in to this exciting (small) world, opening my eyes to new features of places I thought I knew, and helping us find places to explore that we’d by-passed before.

We live on the edge of the Lake District within easy reach of Haweswater – the area includes quite a lot of geology, ie different rock types, with Umbilicaria and Massalongia carnosa amongst others to be found on the fells. Beside Haweswater are the old-ish woods at Naddle Forest and Mirkside which seem to be the easternmost remaining patches of temperate rainforest with species such as Lobaria pulmonaria and Bunodophoron melanocarpum.

However our local patch is Knipe Scar, common land north-west of Shap, a heavily grazed limestone fell with areas of limestone pavement. Looking up the NBN Atlas, Caz found that the only lichen records were six figure grid references for Peltigera leucophlebia, recorded by local lichenologist David Clarke. Eventually we spotted some and, once we got our eye in, found quite a few more patches in short grass in thin soil over rock.

On 15th June 2019, Caz found a patch of P. leucophlebia that was fertile, which we understand is rare in the UK and probably a first for Cumbria. On the following day, further patches were found close by, starting at NY5414118479 ie in the southern section, next to Shapbeck Quarry. David Clarke visited and confirmed the sighting a few days later.  To our knowledge, no other fertile colonies have been seen elsewhere this year to date.

P. leucophlebia is green with dark wart-like cephalodia on its upper surface, and distinct veins and dark rhizines on the underside, paler towards the margin.  The first fertile instance had a few apothecia; subsequent patches had multiple fertile lobes. When fertile, P. leucophlebia has red-brown apothecia on the upper surface of tongue-like lobe-ends. In the examples found, the lobes were strongly recurved, revealing characteristic green corticate patches on their undersides and concealing the apothecia. The apothecia themselves were round to oblong with smooth to crenulated margins.

We’ve been recording lichen sightings and even managed to submit some spreadsheets. The ‘coincidence map’ of records for Cumbria shows that it is mostly blank space ie no records for most monads – a lot of work to do!  Hopefully our records will literally get lichens on the map and encourage others to find what’s there. Chris Cant 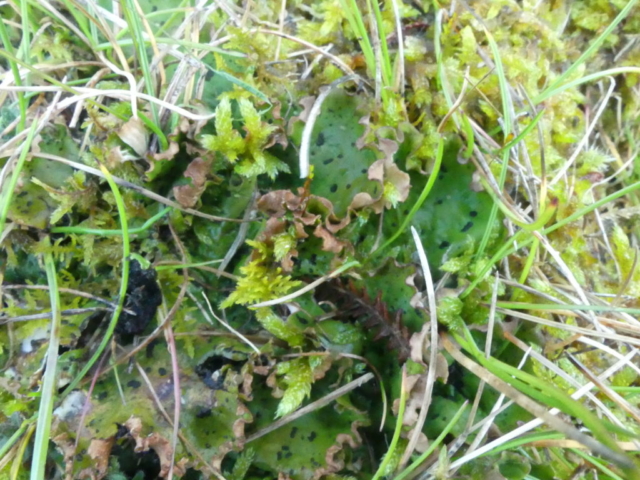 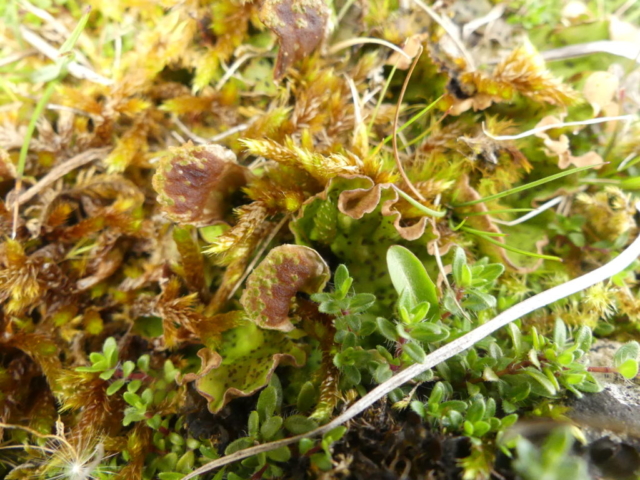 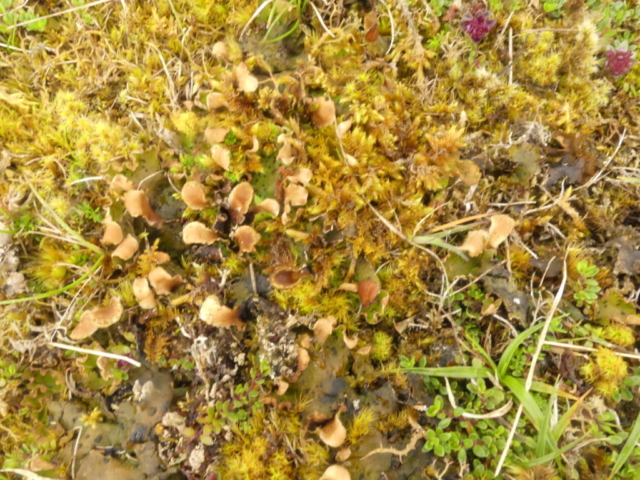 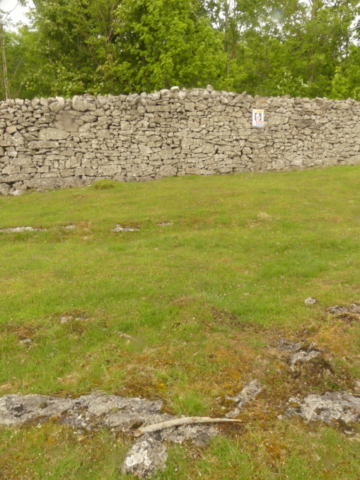